The Bonfire of Destiny Behind the scenes of TF1's remarkable series

Almost 20 years after Les Misérables and Le Comte de Monte Cristo starring Gérard Depardieu, The Bonfire of Destiny marks the grand return of costume dramas to TF1. A challenge on a par with the ambitions of Europe's No. 1 TV channel. Le Minorange takes you to the filming of this remarkable series.
By Valentin Althuser 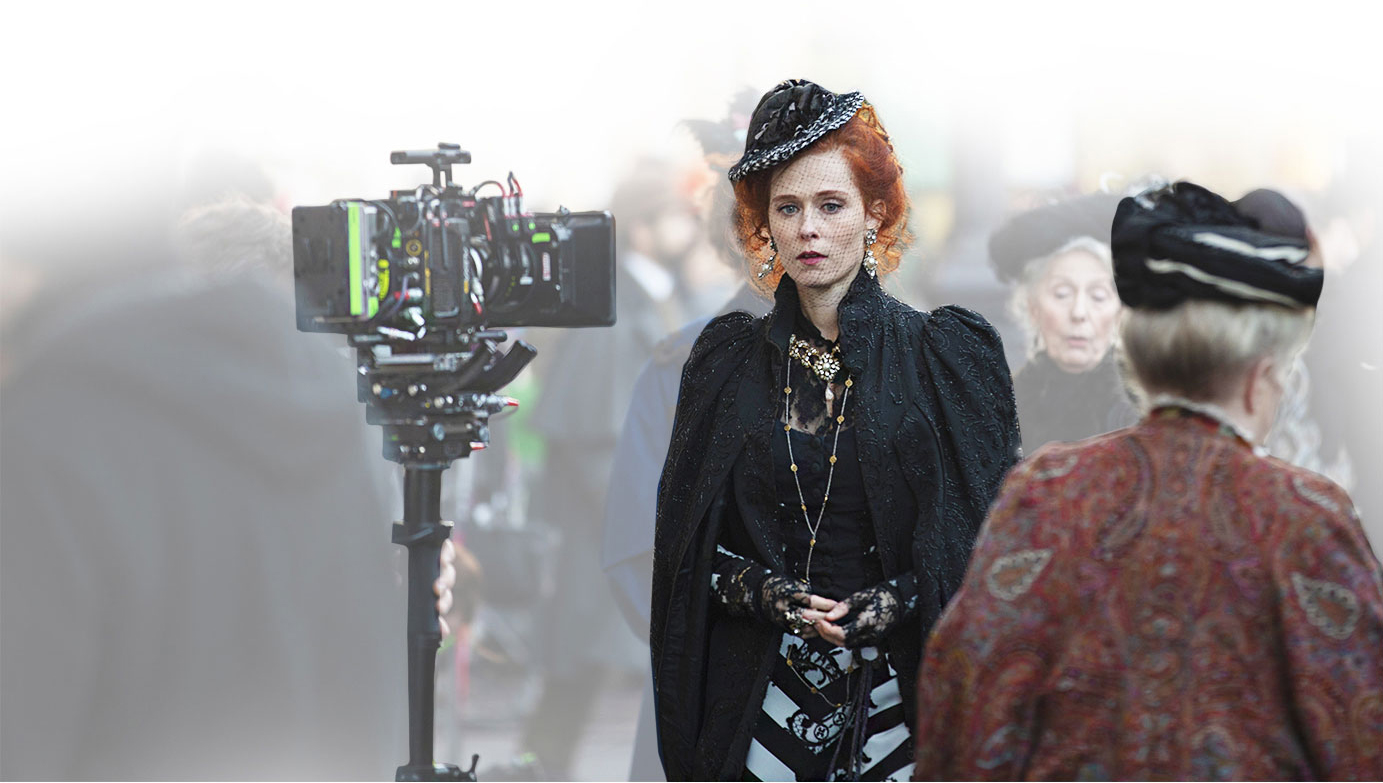 A STEP BACK IN TIME

A man wearing a top hat, redingote, and well-polished shoes crosses Rue Louis Boilly, in a posh neighborhood of western Paris. A ﬁacre pulls up in front of the Marmottan Monet Museum. The doors open and… “Cut!” The director’s voice echoes oﬀ the fake walls of the set. “Let’s do it again.” Alexandre Laurent, who is already at the helm of La Mante and Secret d’Élise, two big hits on TF1 that are averaging over 6 million viewers, wants this series with eight, 52-minute episodes to be ﬂawless. A coproduction of TF1 and Quad Télévision, The Bonfire of Destiny is a plunge into the Paris of the late nineteenth century. Everything is calculated to create a backdrop true to that period. A big Morris column covered with old advertising posters hides a parking meter, ﬁne black gravel covers the asphalt on the wide street chosen for this scene, and all traﬃc signs have disappeared. “The most complicated part is that today nothing looks like it did back then,” says Iris Bucher, the producer of this ambitious miniseries. 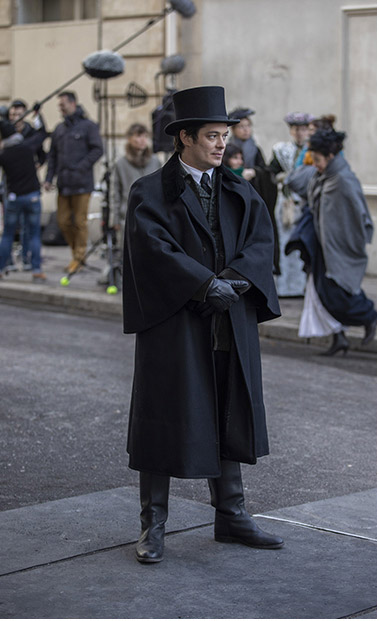 “Action!” Each time the order is repeated, the coachman arrives with his carriage, then drives oﬀ. His horses, irritated by the surrounding noise and spotlights, struggle to stay in their role, while extras cover up in plaid blankets to keep warm and return to the twenty-first century. One peels oﬀ his false mustache, another puﬀs on an electronic cigarette, a third, dressed as a young servant, taps out texts on her phone. During the six months of ﬁlming, between November 2018 and April 2019, no fewer than 3,000 extras passed in front of Alexandre Laurent’s cameras. Added to them are 200 or so technicians needed for this super-production slated for international distribution.

Stéphane Éveillard, VP Acquisitions - Drama & Non scripted, comments: “The Bonfire of Destiny is an extremely ambitious project in the way it is being made, and it is being made, and it is universal in the destinies it describes. TF1 Studio 1 is distributing the series and has big ambitions for it in international markets.” Testifying to these ambitions, TF1 and Netﬂix, the global leader in online entertainment, have signed an exceptional preﬁnancing agreement for The Bonfire of Destiny. This partnership will give Netﬂix exclusive rights for worldwide SVoD 2 distribution for four years. The rights will be available to Netﬂix in France as of the eighth day after the ﬁrst broadcast of the last episode of the series. “This points to our desire to be able to investment more heavily in world-class French drama programming,” says Ara Aprikian, executive vice president, Content, of the TF1 group. 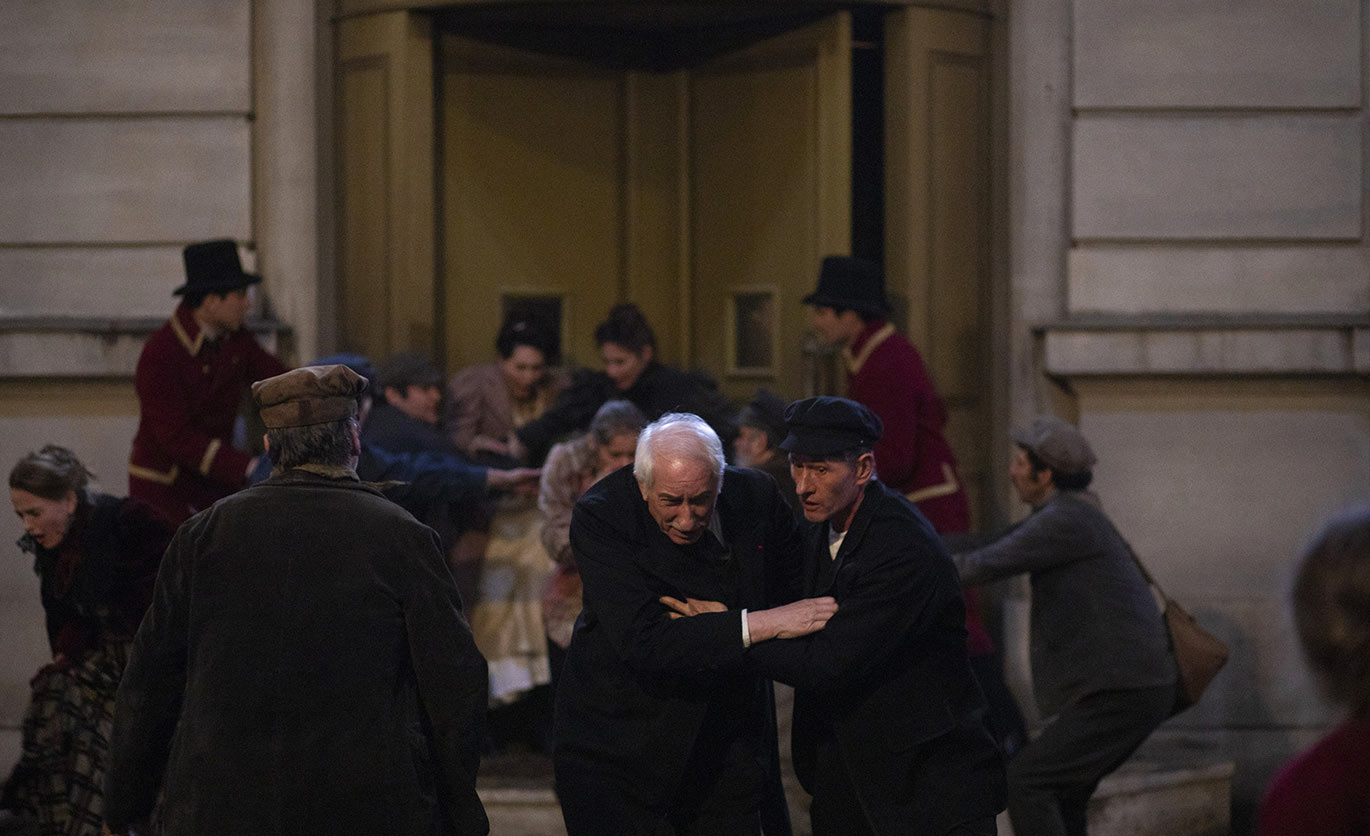 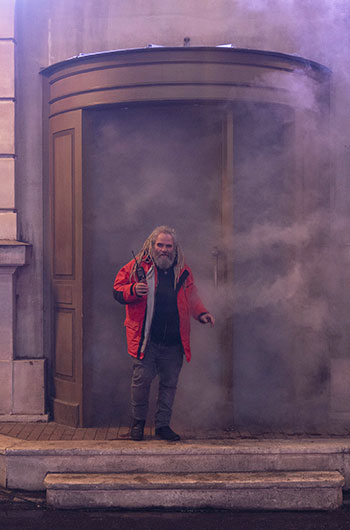 Thick white smoke escapes from the large revolving doors on the set, but there is no need to panic. The tricky-to-ﬁlm scenes of the ﬁre inside the Bazar de la Charité were shot a few weeks earlier in the studios at Bry-surMarne, near Paris. “It’s the ﬁrst time scenes with ﬂames that large have been ﬁlmed in France. There were 60 bottles of gas on the set. A moment of carelessness and there could have been a catastrophe,” says special eﬀects supervisor and manager Yves Demenjoud. “Sometimes the actors weren’t acting frightened; they actually were,” recalls Alexandre Laurent.

To deal with the exceptional conditions during the 52 minutes related to the ﬁre, 200 costumes had to be specially designed. “I could use only natural materials and absolutely no synthetics,” explains costume designer Valérie Adda, a bit disconcerted. “It was hard to watch these creations go up in smoke, but it was quite an amazing experience.”

Audrey Fleurot
I adore performing in period costumes and not recognizing myself in the mirror. I feel nostalgia for the golden age of sagas, of these sweeping romantic stories.

Red hair crowned with a veiled hat, sparkling jewelry, and an haute couture dress – Audrey Fleurot is easy to pick out among the 80 extras on hand for the ﬁlming today. The heroine of Engrenages and Intouchables plays Adrienne de Lenverpré, an aristocrat, an avant-gardefeminist, and a woman unhappy in her marriage. “I adore performing in period costumes and not recognizing myself in the mirror. I feel nostalgia for the golden age of sagas, of these sweeping romantic stories,” she remarks between two takes. Antoine Duléry, Josiane Balasko, Gilbert Melki and Stéphane Guillon round out the ﬁve-star lineup. “The leads had to be suﬃciently well known to carry the series,” notes Bucher. Among such stars, TF1 chose familiar faces on the channel. Julie de Bona, heroine of the series Le tueur du lac, Camille Lou, from the cast of Bracelets rouges, Victor Meutelet (Clem and Les Innocents), and Florence Pernel (Mes amis, mes amours, mes emmerdes) are part of TF1’s DNA.

Rue Louis Boilly, a few minutes before midnight. The last spotlight goes dark after a day of shooting. The actors and extras can ﬁnally slip back into their comfortable jeans and sneakers. As for TF1’s viewers, they will have to wait until the second half of 2019 to begin enjoying this ambitious period drama.

QUIET ON THE SET! 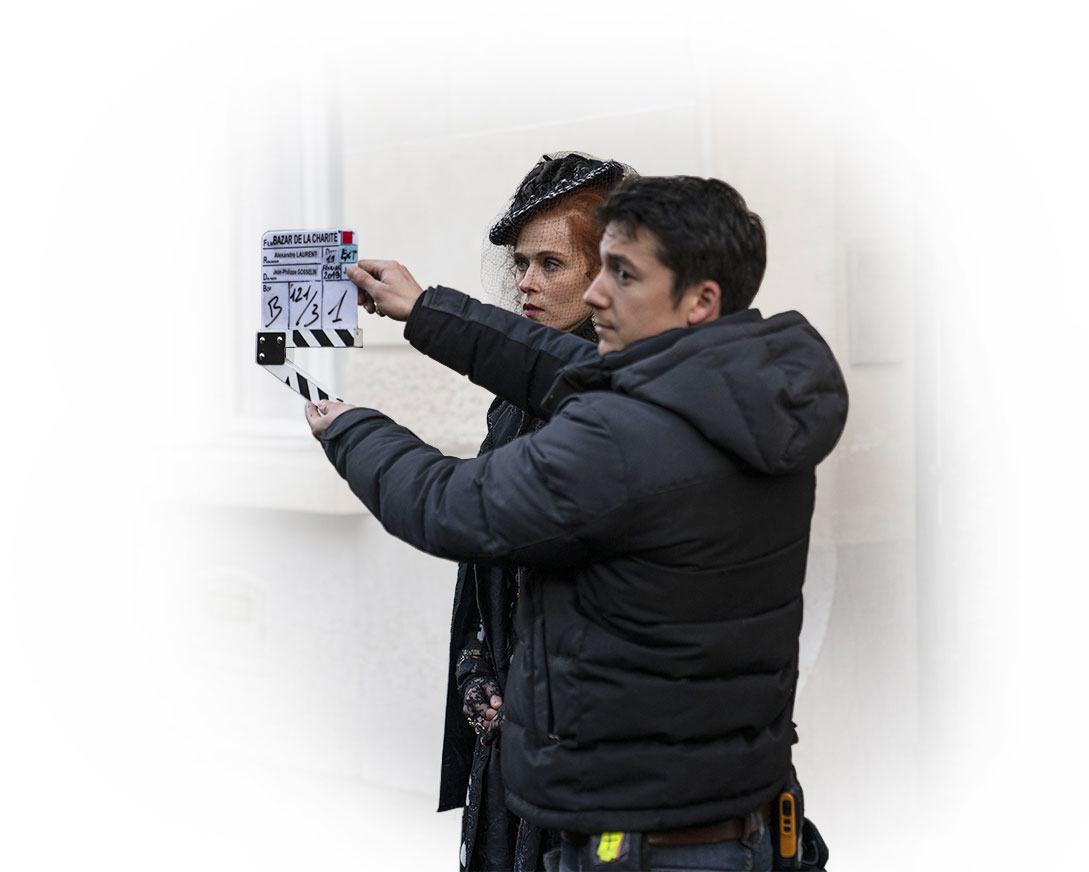 Anne Viau, Artistic director of French drama at TF1
This is a very big project with a very big budget. Would you say it is a risky bet for TF1?
It is one of our most ambitious projects this year. One could say we’re taking an editorial risk with high expectations, yes. We’re betting on being able to oﬀer a historical drama that’s also modern. The screenplay is excellent. So is the casting, and so are the ﬁrst rushes [the ﬁrst scenes ﬁlmed – ed.] we’ve seen. I feel like saying that all the planets are aligned for this series to be a huge success. Also, if it works, it will strengthen our belief that when you take risks and take TV viewers to a place they don’t expect to go, it’s a good strategy.
Does this point to a desire of TF1 to go back to the costume dramas that were such big hits for the channel in the early 2000s?
Quite honestly, there was no desire to go back to series in that genre. On the contrary, even. What appealed to us from the beginning was the story. When we received the proposal more than two years ago now – there were about ten pages at the start – we were immediately carried away by it. In the French drama department, we’re looking for things that are bold, modern, and artistically ambitious. This project checked all the boxes. 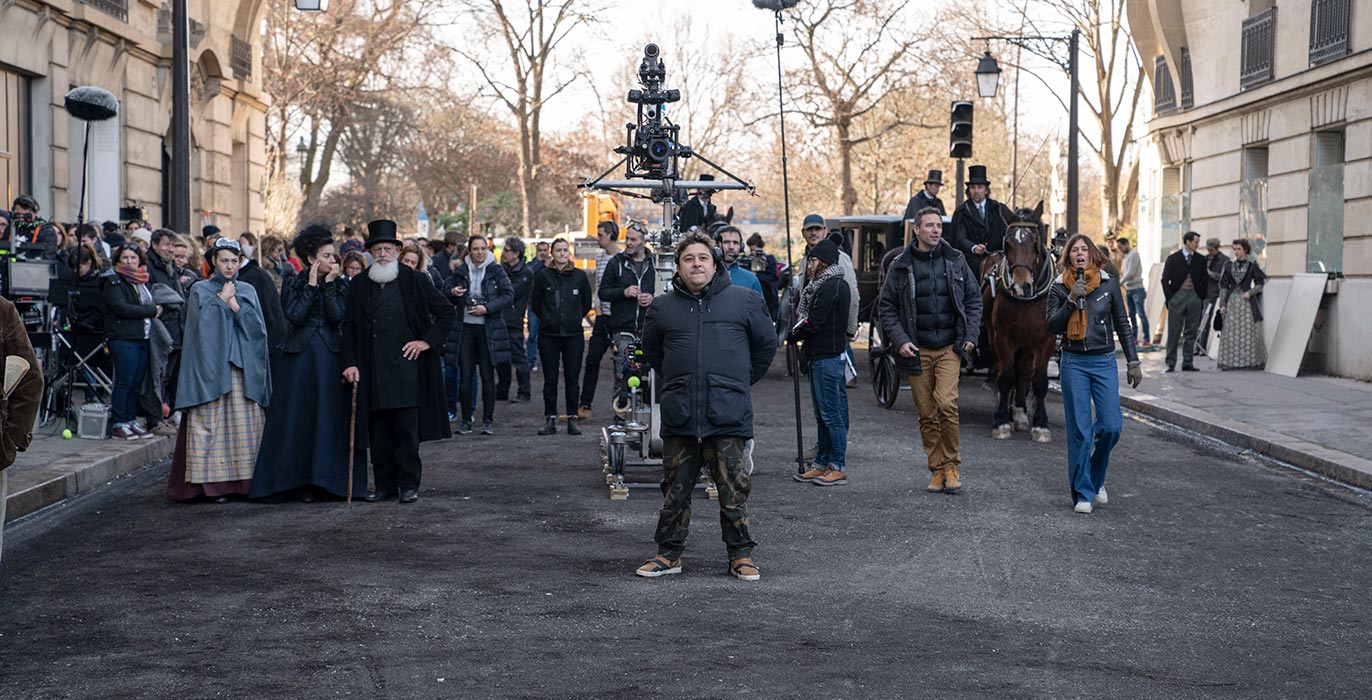 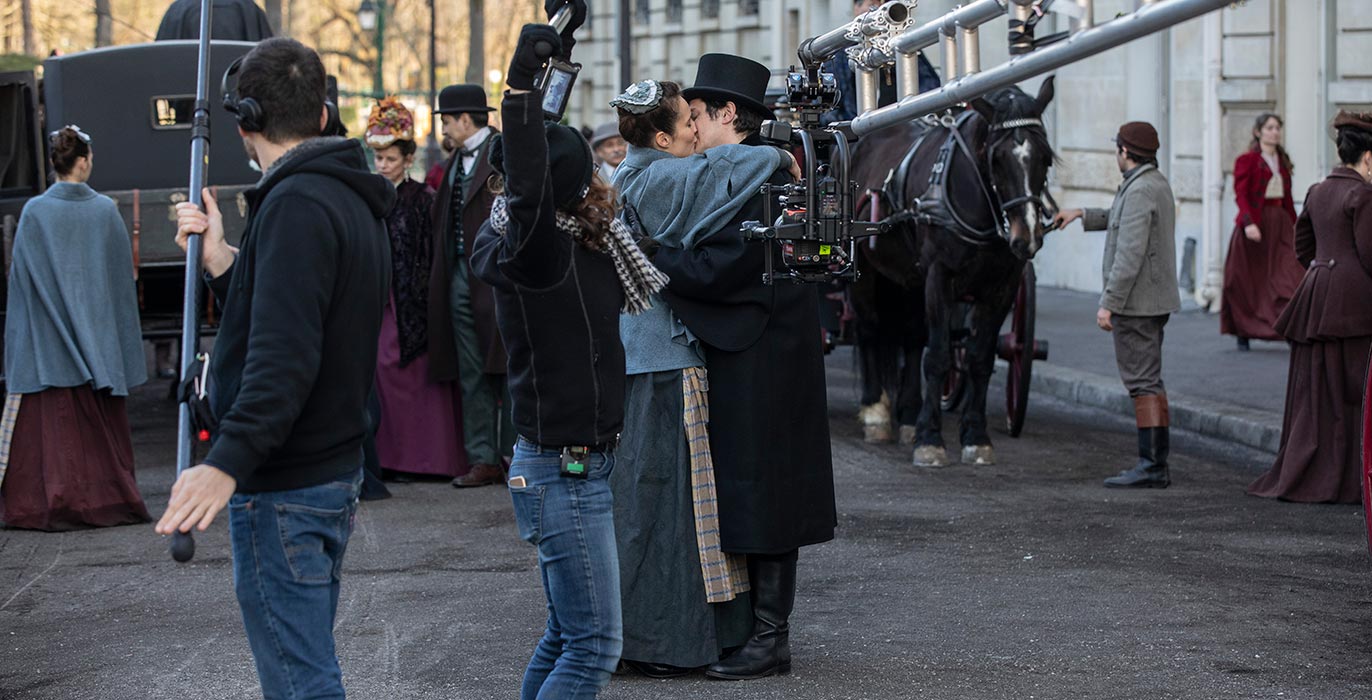 The series was filmed in the Paris region between November 2018 and April 2019. 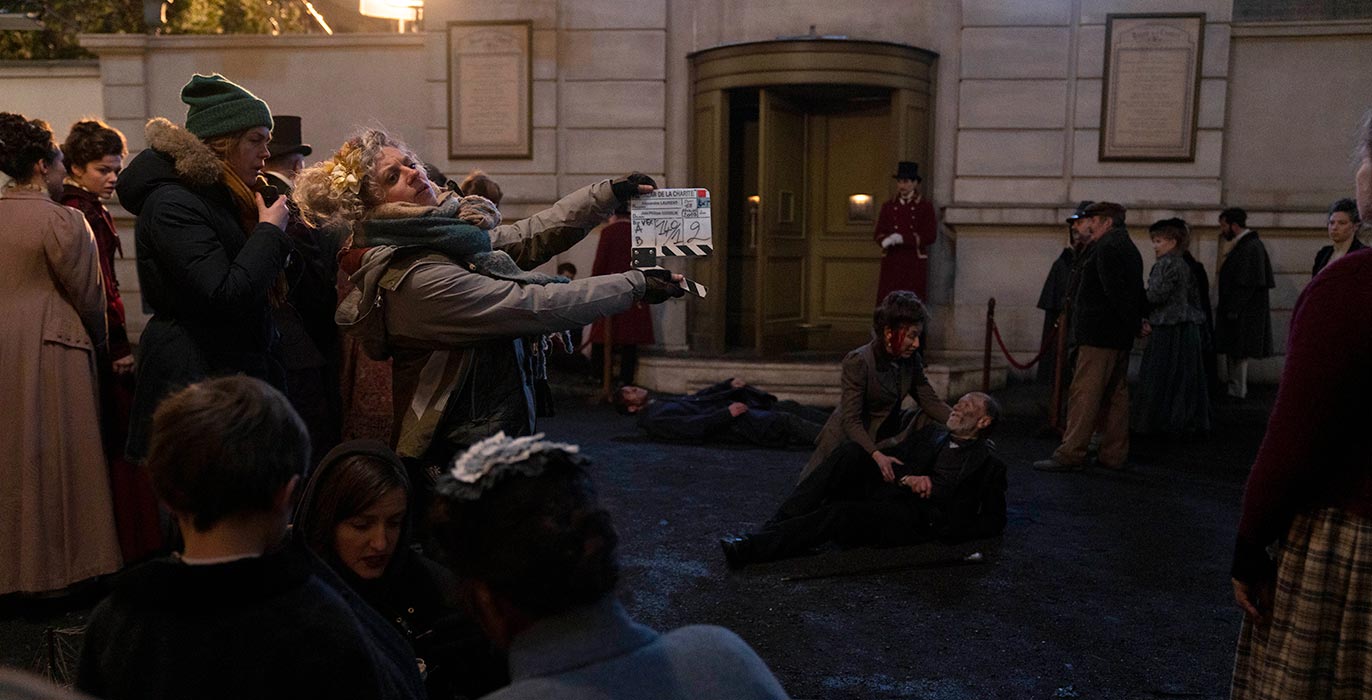 The scenes of chaos at the exit of the Bazar de la Charité in flames were filmed on Rue Louis-Boilly in the sixteenth arrondissement of Paris. 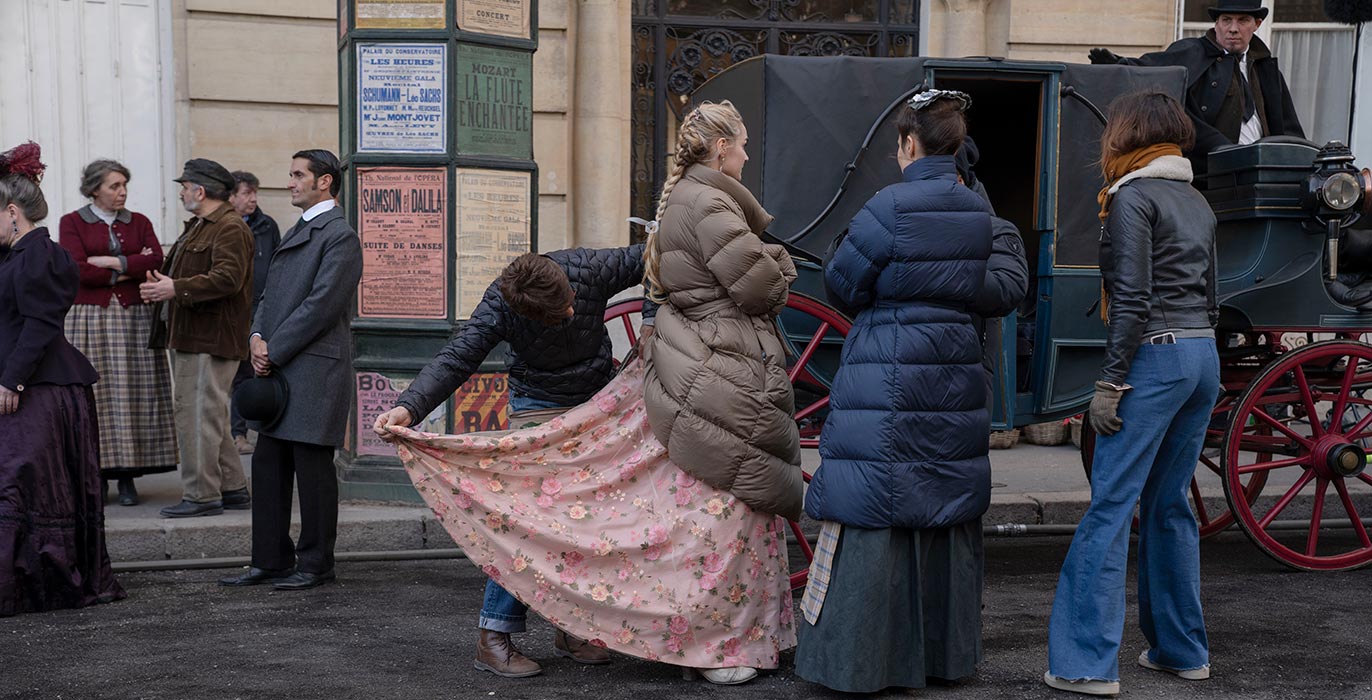 Julie de Bona (right) has the role of Rose Rivière, the governess of Alice Jeansin, played by Camille Lou (left).