With the launch of a new Gender Equality action plan by the Group’s Human Resources department, Le Minorange spoke with five women about their careers, achievements… and the difficulties they have faced in the Group. Five accomplished and ambitious women who have successfully claimed their place in male-dominated workplaces.

2023 objectives for women in the Group

In 2010, Martin Bouygues asked that a survey be done to answer this question. Drawing on the results, the business segments began taking initiatives, and in 2017, a Gender Equality action plan was introduced at Group level.

The objectives? To hire more women and give them more support to advance their careers. Today at Bouygues, 20.7 percent of head-of-department positions or above are held by women. The percentages of women in the workforce (18.8 percent) and in governance roles (21.1 percent) are both rising too. Each business segment and corporate have developed women’s and mixed-gender networks, while 800 female employees are benefiting from a mentoring program in the Group. Another noteworthy initiative is the partnership with the Women’s Forum, an organization striving to give women greater representation insociety and provide inclusive solutions to global social and economic challenges. Nevertheless, gender equality goals for governance bodies and employees have not been achieved. The verdict is clear: despite the Group’s energetic policies, the challenges of inclusion and supporting the career development of women have not been met. For that reason, a new and more ambitious action plan was initiated in 2021. Each business segment has set annual targets for a three-year period. Indicators will measure the percentage of women in management as well as those with strong potential for advancement and in corporate governance bodies. Another ojective is to let people know about women who are pursuing successful careers in the company. In this article, we hear from five of them.

“MY ADVICE TO WOMEN: BE BOLD!”

“I grew up in Morocco, but my professional career began at Colas Rail, in France. Fresh out of school, I found myself working surrounded by men, all of them older than me. It was hard at the start. I had to prove that I knew what I was talking about and that what I said was right. In 2015, I returned to Morocco. I worked first as the catenary manager in the high-speed train project between Tangier and Kenitra and then became the pricing studies manager for the entire country. I was still quite young, still working in a male-dominated environment, but I had a technical streak and more experience: I felt respected. During that period, I hired two women for the workshop where the catenary droppers are prepared. They were far more meticulous than the men doing the same job. Having both women and men working together changed the atmosphere. There were fewer offcolor jokes and more mutual respect. Today I’m living and working in Canada. In this country, women are valued and regarded as assets in a team. Because there is respect for others, women enjoy a better chance of promotion in their work. My advice to women? Be bold! Dare to seize opportunities and say what you want without waiting for it to be offered to you. Women in the Group are too self-effacing, even invisible. They should have more prominent roles, and there should be more transparency regarding salaries. Why not publicize the salary scale and adhere to the principle of pay equity?” 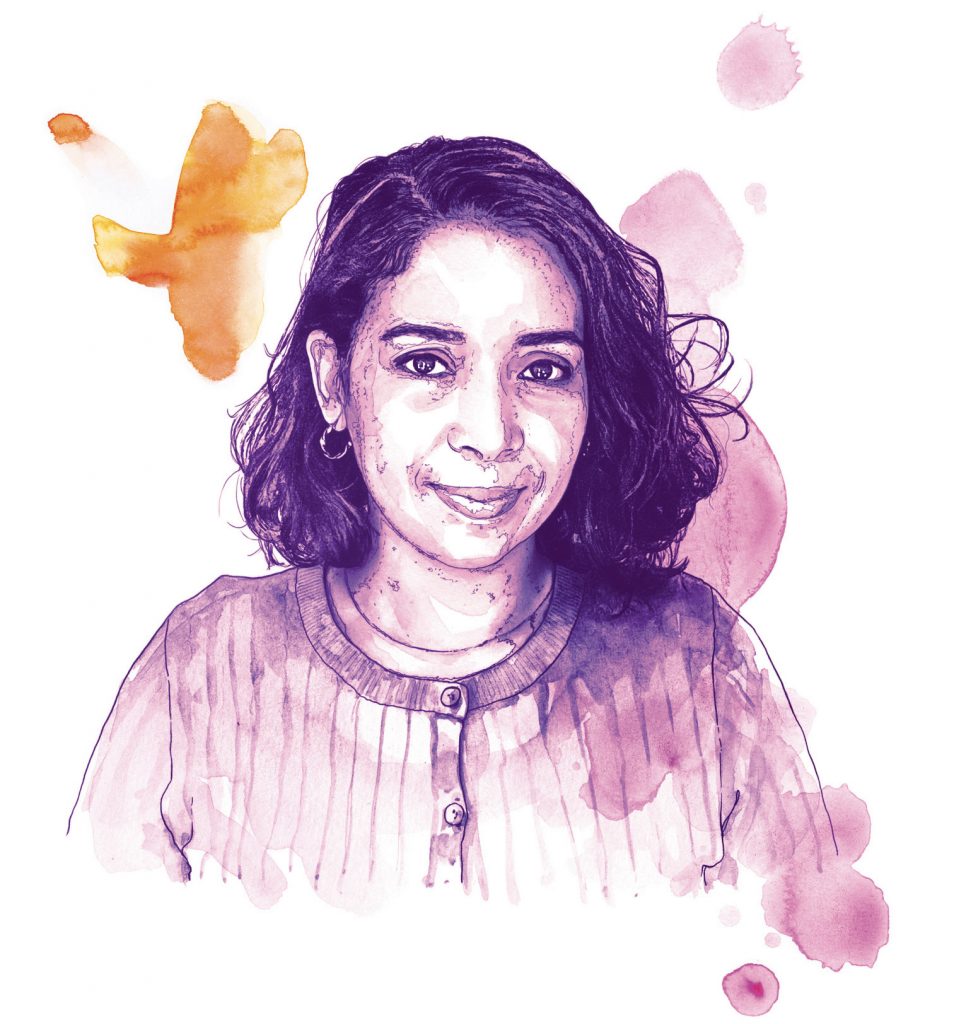 “IT IS ESSENTIAL TO KNOW HOW TO COMMUNICATE ONE’S AMBITIONS AND ASPIRATIONS.”

“When I was a student, I wasn’t at all concerned about gender equality. I didn’t think it would be an obstacle for me professionally. At the start of my career, I worked in a consulting firm where I was the only woman. For a long time, I had the impression of being off base in a lot of my assignments because I didn’t approach them in the same way as my male colleagues. I just didn’t think the same way they did. I overcame this feeling and lack of self-confidence by becoming an absolute expert on the subject I deal with.

The TF1 group pays a lot of attention to the question of gender equality. For example, I had the good fortune to participate in the women’s leadership program. This training helped me become aware of ways in which men and women are often different and the importance of knowing how to communicate one’s ambitions and aspirations. Something women still don’t do enough. Finding a good balance between one’s work life and personal life is an important subject. I took on professional responsibilities at precisely the time my two daughters were very small. I’ve long felt guilty about not spending enough time with them. Gender equality also involves grappling with our role as parents. To enable more women to take on professional responsibilities, the company probably needs to give employees some support by moving towards a more balanced work-life model.” 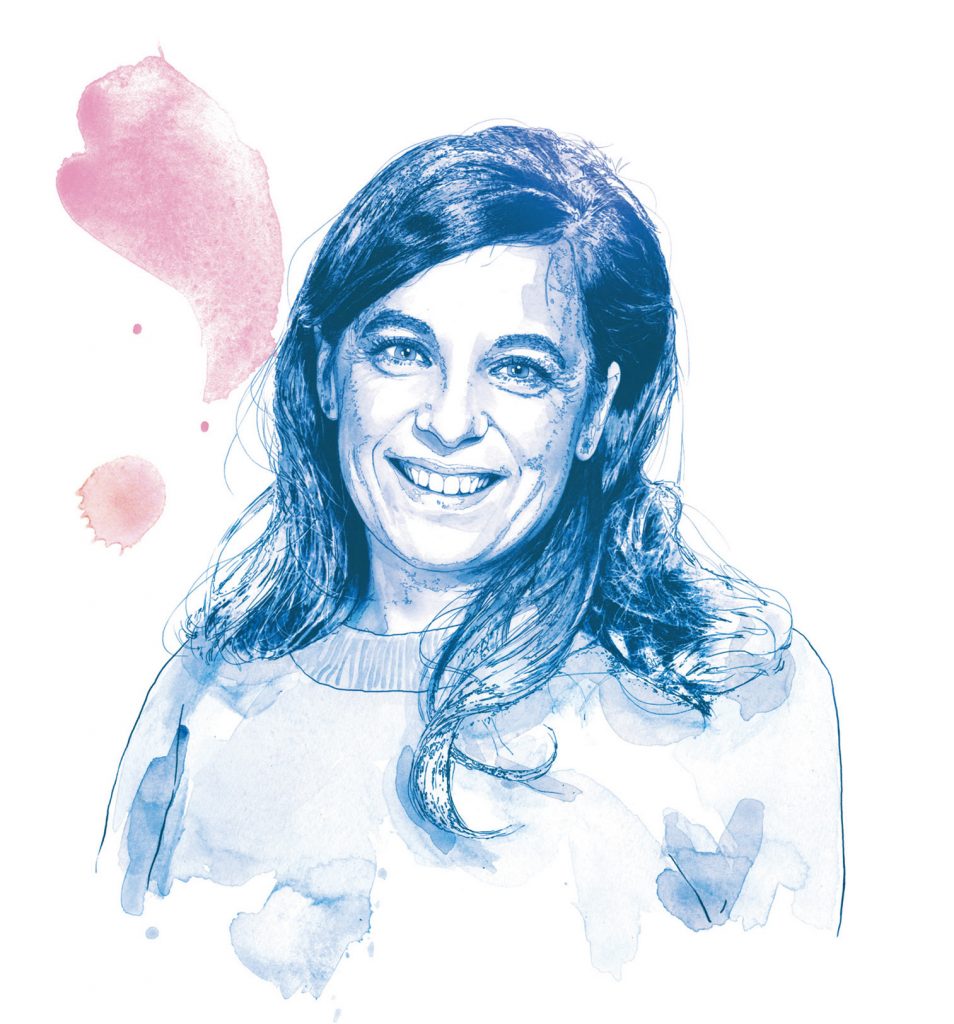 “WE MUST ELIMINATE THE STEREOTYPES IN THE BUILDING AND
CIVIL WORKS SECTOR.”

“I was born in Singapore and came to France in 2002 to continue my studies in building construction. I was ambitious, and I wanted to discover the world. I was hired at Bouygues Bâtiment Ile-de-France – Construction Privée as a works supervisor. I was never told in so many words that I was doing a man’s job, but twenty years ago, I had to put up with a lot of teasing and macho remarks that always reminded me that I was a woman. In 2021, women on the worksites are regarded much differently. We have a role to play in showing that professions in engineering or architecture are also open to women. We must eliminate the stereotypes that are so pervasive in the building and civil works sector and change perceptions from a very early age. I’m in the technical department at Bouygues Bâtiment International today, and I’ve had the opportunity to work on very big projects like Ocean Cay, in the Bahamas, the Longchamp racecourse, in Paris, and the CFC tower, in Morocco. In a team of men and women from diverse cultural backgrounds, I manage people who are sometimes older than me, and I encourage everyone to share their opinions. In my view, a female manager who is successful in her job and her private life is a source of inspiration for all women in the company. At school, I was taught that nothing is impossible, that I could do things just as well as a boy of my age. Being educated in this way enabled me to develop. If I can apply for a position that interests me, I will do so without hesitation, because there’s no question of letting an opportunity pass by.” 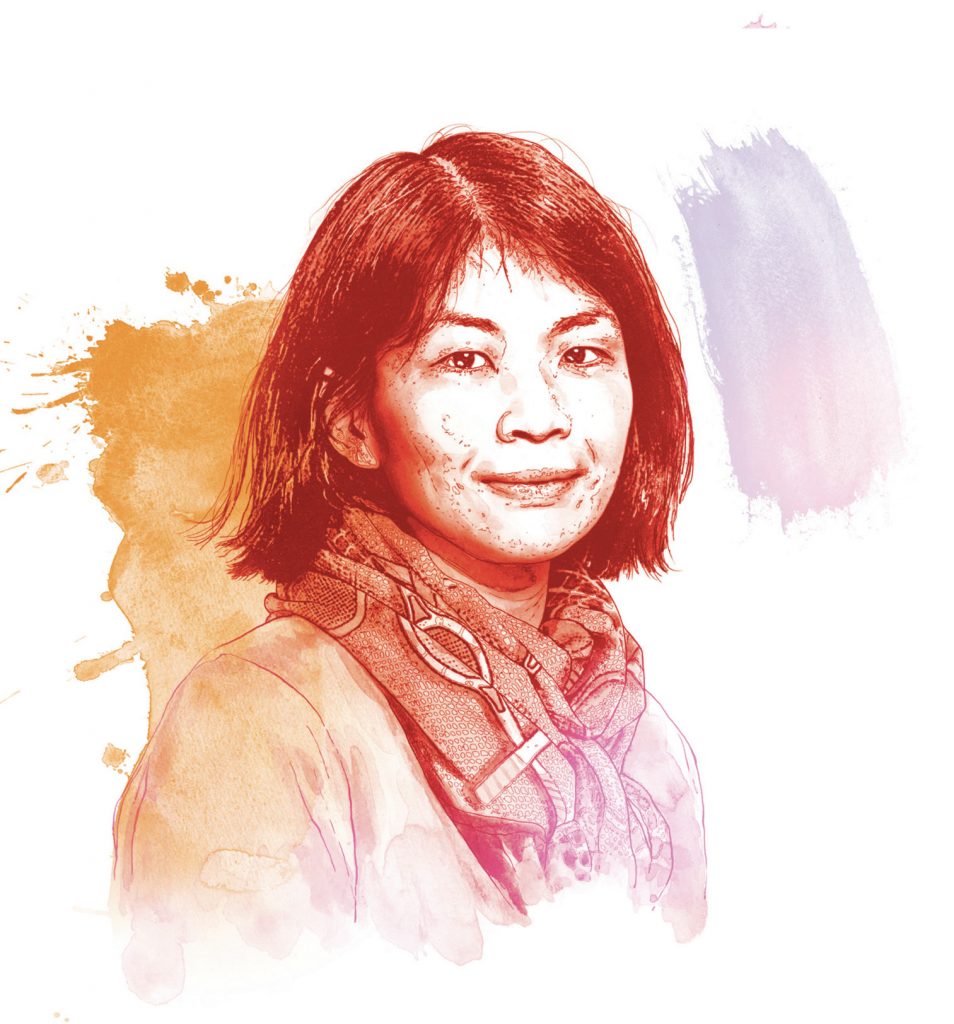 “THE WORK-LIFE BALANCE IS A GENDER EQUALITY ISSUE.”

“At the start of my career, when I interacted with project stakeholders, I was often working with men who were older and more experienced than me. I remember having an inner voice that told me: Show them what you can do! I wanted to be extremely thorough and very reliable to make up for the lack of self-confidence. Going ahead and acting rather than worrying about what’s going to happen is the best remedy. I had moments of doubt, and I made trade-offs. When I was offered the position of agency director at Bouygues Immobilier, I hesitated. Was I capable of doing it? Sometimes I felt guilty in relation to my family. I try to get beyond this feeling of guiltbecause time spent feeling guilty is ultimately not very productive. Balancing one’s work life and personal life is a gender equality issue, in my opinion. Women’s aspirations, but also men’s, have changed. The old model is no longer what we dream of! This sometimes creates a situation where women give up their own ambitions to avoid having to make the choice to put their career first, ahead of their personal life. Large companies like ours have a duty to help us deal with these social changes.” 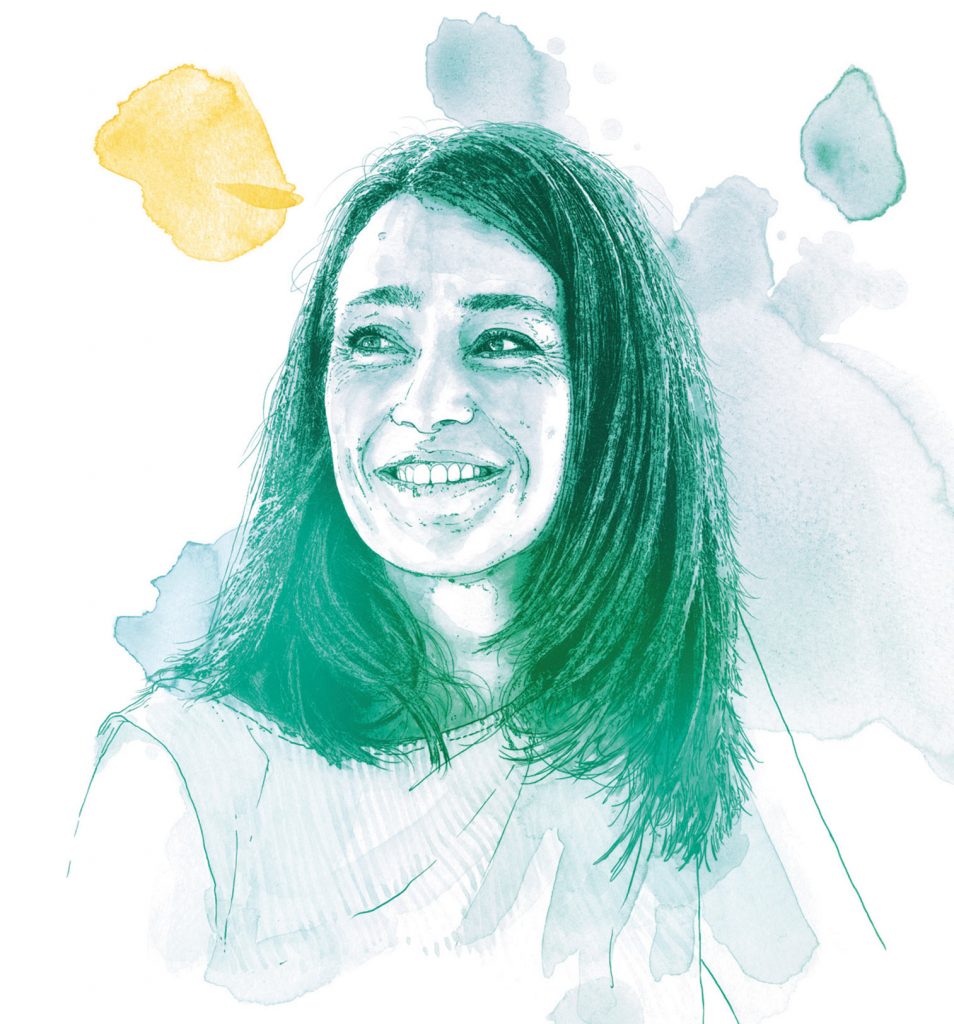 “PARENTHOOD IS WHERE ACTION IS NEEDED FIRST.”

“Early in my consulting career, I remember often suffering from an inferiority complex. I thought others were doing a better job than me, and what’s more, they knew how to capitalize on it. But with more experience, and with my good performance giving me more confidence, I realized that was not the case. Recognizing my worth enabled me to progress professionally. I’ve never had the impression that my being a woman was an advantage or disadvantage. In the masculine settings where I’ve mainly worked, I even saw it as something positive. I think the measures taken in favor of women, whether in salary policies or appointments, work against us because they do not put us on an equal footing. In my view, parenthood is the area where action is needed first. If fathers were more involved in parenting, and as of the pregnancy, it would create a different dynamic. As a mother of two children, I always accepted being unable to get to the office by eight o’clock and to leave at eight, but I think men are less inclined to accept these constraints. And that should change. All women who have raised children while pursuing a career should receive the Legion of Honor. But in the end, that situation turned out to be positive since it taught me how to focus on the essential and to deal with more responsibilities. I wouldn’t be where I am today without my children. Women have a natural tendency to doubt themselves, to be self-questioning. It’s almost a malady. Men, on the other hand, are much more assertive. When I was promoted to customer relations director at BTBD, I asked myself, “Why me?” I knew I was qualified for the job, but I didn’t automatically accept it as my rightful place. My advice is to have confidence in yourself, be assertive, and if you think you know.” 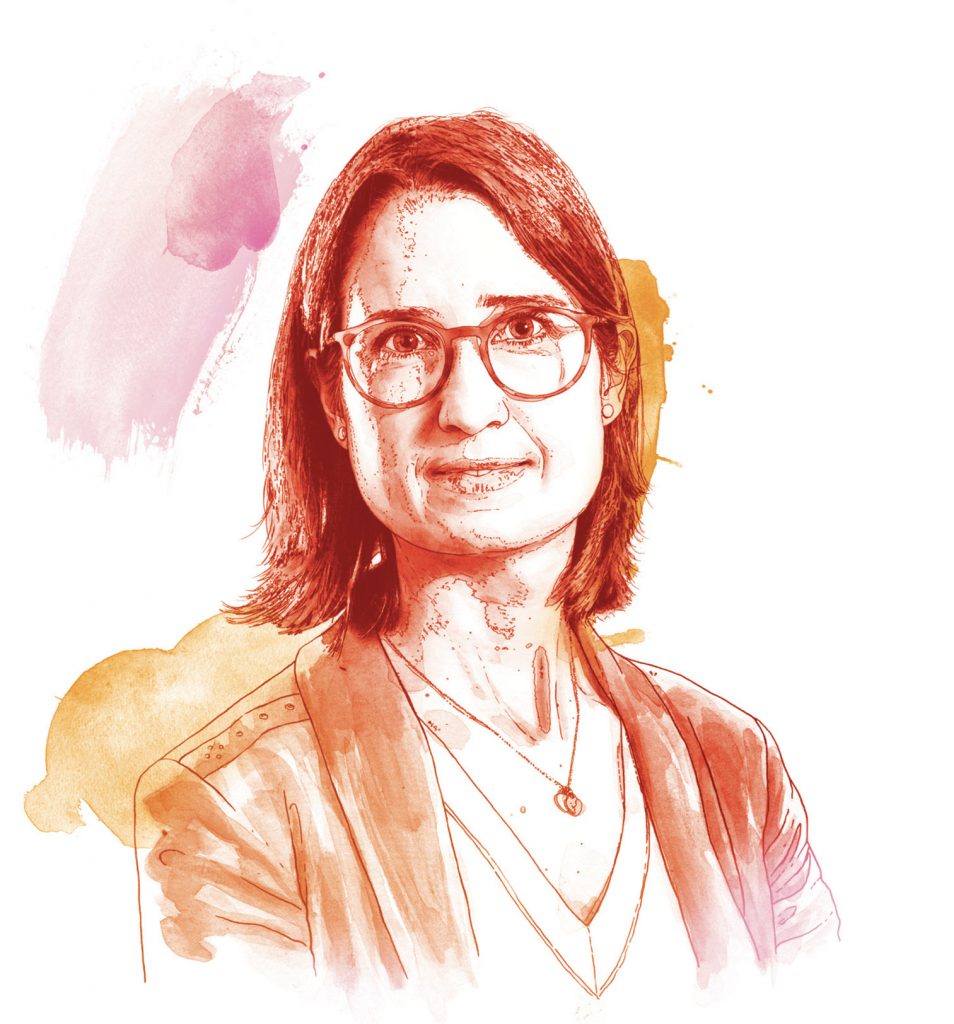