Founded in 2005 by Martin Bouygues to promote equal opportunity for all, the Francis Bouygues Foundation supports motivated and deserving school leavers from low-income families so that they can pursue long-term studies and fulfil their ambitious career goals.

I’ve always found it grossly unfair that gifted and hard-working young people should be prevented from studying due to social or financial reasons. 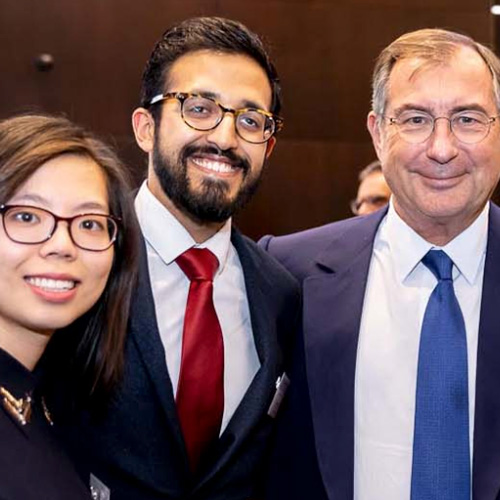 The Bouygues group contributes to the economic and social development of the regions and countries where it operates through economic and community initiatives as well as through patronage.

Since 2001, the patronage policy of Bouygues SA, the parent company of the Bouygues group, has focused on the themes of education, healthcare, humanitarian and environmental initiatives.

In the field of education, the Bouygues group supported five non-profits in 2021 to help students in difficulty.

Non-profit Fraternité Banlieues was founded in 2000 with the aim of providing non-formal educational support to students aged 10 to 18 from the suburbs surrounding Rouen. It provides an unconditional welcome to students who are given support through play and various recreational activities. It was awarded the “Dynamique Espoir Banlieues” (bringing hope to disadvantaged suburbs) label in 2009 and the “Jeunesse et Education Populaire” (non-formal education for young people) certification from the regional department of youth, sport and social cohesion in 2010.

COREP (a centre for career guidance and psychological testing) was created by SPAEEM (a society for the protection of apprentices and children employed in manufacturing) to help young people to achieve their academic and professional goals.
Bouygues has provided financial support to it since 2011.

Founded in 1991 at the initiative of painter Gérard Garouste, non-profit organisation La Source organises educational and social initiatives through artistic expression among underprivileged children, young people and their families. Its founding belief is that artistic creation can be used in support of social initiatives to help combat all forms of exclusion.

Set up in 2000, this non-profit sends new books in French to Madagascar. The books are then distributed locally.
Bouygues has provided financial support to it since 2008.

For 20 years, Réseau Môm’artre has been providing innovative childcare for 6 to 11 year olds through active teaching methods using art to stimulate children’s creativity and empowerment. Réseau Môm’artre operates in underprivileged areas across France where there is a high rate of social diversity and a large concentration of families in difficulty.

In 2021, the Bouygues group extended its three existing patronage initiatives to include the environment. Targeted projects fall within the scope of research activities, bio-inspired innovations, climate support initiatives in the field, as well as raising awareness about the ecological transition.

TIME FOR THE PLANET

Time for the Planet is the first non-profit (no dividend, no capital gains) investment fund open to all (the general public, businesses, local authorities, etc.) whose aim is to raise one billion euros. Time for the Planet aims to identify the best innovations worldwide that will contribute towards reducing the greenhouse gas emissions responsible for climate change and to create and finance 100 companies that will adopt them. These businesses will then immediately provide their innovations in open source so that they can be copied and marketed the world over.

In 2020, Time for the Planet brought together some 5,000 citizen-shareholders, raised €1 million using its own participatory platform, launched a viral press and communication campaign, created a scientific committee comprised of the best French experts in technical innovation, the climate and industrialisation, and created a network of hundreds of appraisers.
In 2021, its aims are to raise €10 million and create the first three partner companies.

LUMIÅ is a private higher-education institute and a vocational research unit combined. It helps people upskill and places them on a pathway to creating viable and fulfilling transformational projects that meet specific needs.

Request for financial support for international research on: “Regenerative business models – Reconciling business with environmental and social regeneration”. The purpose of this research is to define and disseminate the regenerative economy principle for replenishing our ecosystems so that our planet can continue to support us.

The French Commission for Unesco, a non-profit body, exists to strengthen France’s intellectual contribution to Unesco as well as promoting its work within French society.

Partial funding request for research on humid head waves. This research aims to develop forceful incentives that will encourage countries to act against climate change.

According to the French Commission for Unesco, current research into climate change completely overlooks the phenomenon of ‘inhabitable zones’, which are expected to arise in the future under the effects of humid heat waves. Even at still bearable temperatures of 35° or 40°, heat – when combined with increased humidity – prevents the human body from sweating, which can be an immediate cause of death. Based on the current upward trajectory for CO2, specific areas of the planet (mainly in South East Asia) will become inhabitable for several weeks of the year some time between 2030 and 2040. The potentially affected population runs into hundreds of millions.

The French Commission for Unesco is proposing to start new research that will produce detailed maps for each country affected, informed by the work of IPSL-linked research units. (IPSL acts as a hub for climate scientists across France.)

Bouygues SA, Bouygues Construction, Bouygues Immobilier and Colas have teamed up to develop the ESSEC Global Circular Economy Lab, which will train the Chief Circular Officers of the future.

A masters-level curriculum with a planned annual intake of 30 students (from various academic backgrounds) will comprise five mandatory modules, including one dedicated to serving in partner initiatives, e.g. designing and prototyping circular products or setting up reverse logistics chains. Students will also benefit from an annual learning trip to Finland to meet pioneers working in different segments of the circular economy.

The lab will also run a research unit whose findings will be publicised in an annual white paper and through a massive open online course (MOOC). In-service training will also be offered in the form of seminars.

A corporate partners club will every month bring together Executive Committee members responsible for the circular economy within their companies, to share best practice and launch joint initiatives.

They will be given access to ESSEC’s Antropia, a accelerator for socially-responsible start-ups, and the learning track devoted to the circular economy.

FIND OUT MORE ABOUT THE ESSEC GLOBAL CIRCULAR ECONOMY LAB

The Week, a resource for raising awareness about the ecological transition developed concurrently in the US and Europe, operates through four different stages:

This project will also be used as a training and awareness-building resource at the Bouygues group as part of its climate strategy. Funds will be used to kick-start the process. In this initial phase, the concept and partnership strategy will be tested and scripts prototyped. The next stage will involve producing the documentary series and the web platform. Production and post-production will take place in Europe. Follow-up material (After The Week) will be developed during this phase. Funding will also be used to finance the launch and activation stages, including building up the community and activating partnerships.

In field of humanitarian aid, in 2021 the Group supported seven non-profits that seek to support and/or provide accommodation to people in psychological or financial difficulty, or who have a disability or illness.

Non-profit Lazare creates living spaces where homeless or socially-isolated people can live, side-by-side, with young socially-integrated working people. Bouygues has supported it since 2015.

Non-profit Simon de Cyrène, founded by Laurent de Cherisey, provides places where people with disabilities can live in independent studio apartments within large residential buildings that are shared with able-bodied people.
Each Simon de Cyrène community hosts an average of 60 people in a shared apartment building, 30 of whom are able-bodied and 30 of whom suffer from a disability as a result of an accident (head injury, stroke, etc.). The aim is to help them learn to live with a serious disability and become independent. Bouygues has provided financial support since 2006.

Founded in 1981 by Patrick Giros, this non-profit helps homeless people who are victims of sexual exploitation or who are in addiction care.

Founded by a couple 20 years ago, Village Saint Joseph, and more specifically the Plounévez-Quintin dwellings in Brittany, France, are comprised of several family homes that can each accommodate around ten people.

Non-profit Maison Bakhita is a resource centre dedicated to welcoming migrants and helping them to integrate. It provides a living space, support, and recreational and educational workshops.

Founded in 1997 at Limours, near Paris, this non-profit has set in place solidarity initiatives to meet the needs of underprivileged families facing increasing social and financial difficulties. The structure provides a place of exchange and a subsidised grocery shop. It also organises jumble sales, etc.

In the field of medical patronage, the Bouygues group provided support to six medical research non-profits in 2021.

The “Ondine” syndrome, also called Congenital Central Hypoventilation Syndrome (CCHS), is a disorder of the central nervous system where the automatic control of breathing is absent or impaired during sleep. Children suffering from this syndrome require respiratory assistance while they sleep. This non-profit aims to forge ties with parents of children suffering from this syndrome and with the children themselves, as well as carry out research into treatment that might enable sufferers to breath without the use of mechanical ventilation and thus reduce the risk of death.

FOUNDATION FOR RESEARCH INTO CEREBROVASCULAR ACCIDENTS

The Foundation for Research into Cerebrovascular accidents (Fondation pour la Recherche sur les AVC), created in 2014 under the aegis of the Foundation for Medical Research (Fondation pour la Recherche Médicale), is the only foundation in France to finance research programmes solely in this domain. Its aims are to better prevent cerebrovascular accidents by better identifying their causes, to better treat severe accidents by developing new therapeutic methods, to improve neurological recovery after a stroke and, finally, to prevent vascular cognitive impairment.

The Foundation for Medical Research (Fondation pour la Recherche Médicale) has been contributing to research and health for over 70 years and is France’s largest charitable fund raiser for research into many diseases. Each year, it provides financial support to more than 400 new research projects carried out in public research and higher education laboratories. The Foundation is independent and recognised to be of public interest. It has been awarded the “Don en Confiance” label.

Founded in 1916, Fondation du Souffle is a non-profit recognised as a public-interest organisation. It aims to bring together players across France in the fight against respiratory diseases, and to promote and support research projects to help combat respiratory diseases and their causes.

The Women’s Cardiovascular Healthcare Foundation aims to save the lives of women by raising awareness around three key actions: Alert, Anticipate & Act. Through active prevention, cardiovascular screening and a healthcare pathway, healthcare professionals come together to give women access to care in a comprehensive, multidisciplinary healthcare ecosystem.

Founded in 2012, Paratonnerre was the first non-profit organisation in the world for the rare NORSE (or FIRES) syndrome, which affects previously healthy children aged between 4 and 10. Aims: 1) to understand how NORSE syndrome strikes in order to take preventive measures and to improve the lives of children and their families who are affected by the illness, 2) to promote research and best practice among medical and paramedical staff during the acute phase and in to long-term therapies.