Insights
5 min
19/05/2017
Doesn’t time fly? The TV channel LCI is already celebrating its first year since launching on freeview DTT in April 2016. It’s been a year of transition and success for the pioneering rolling news channel, which has had to reinvent itself. Read on.

April 2016 marked a big change for LCI. The channel girded itself for a new battle and to meet a major challenge - that of switching from pay-TV to freeview in order to face its new competitors. Its migration to freeview DTT marked an initial victory in this process. “We went through a difficult, intense period, with many twists and turns,” recalls Julien Arnaud, presenter of the Grand Soir show.

The switch to freeview pays off 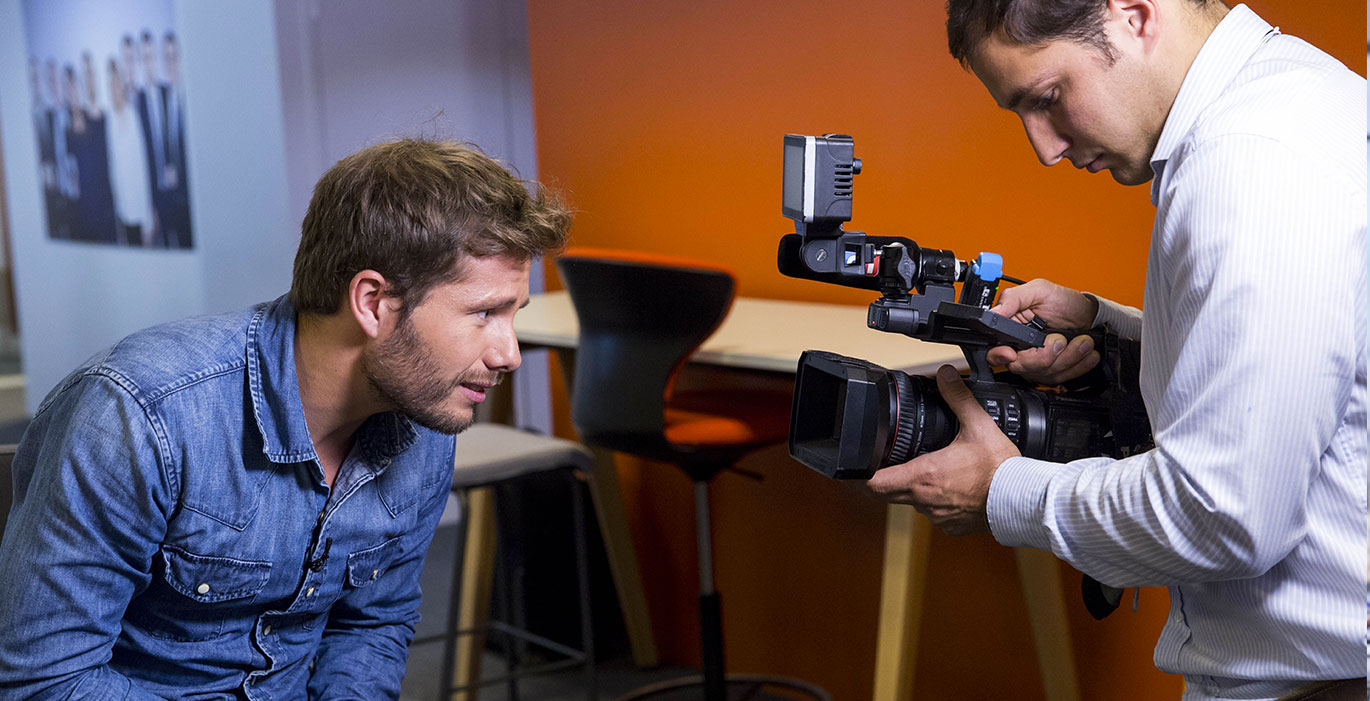 It really
is a renaissance…
Thierry Thuillier, Chief Executive Officer of LCI

The ratings posted by the show 24 Heures en questions prove this, with its average of 287,000 viewers, equating to a 15-fold increase versus the same slot when LCI was still a pay-TV channel. LCI’s first year on freeview DTT also saw a particularly important event - its joint airing of the first televised debate between the French Presidential candidates on 20 March 2017, which drew in 345,000 viewers. LCI, which broadcasts on channel 26 and no longer focuses on hard news but on analysis, making this one of its major strengths, has since capitalised on its initial success. News is analysed by some 200 journalists at the channel and this has “always been in our blood,” according to the presenter of LCI et vous, Bénédicte Le Chatelier. “It really is a renaissance. It’s extremely stimulating to be part of this new era,” says Thierry Thuillier, CEO.

Record
Nearly 158,000 TV viewers watched François-Xavier Ménage’s morning show on 9 November 2016 when the news of Donald Trump’s election as US president broke. This was a record figure for the broadcast.

LCI’s overhaul is not just aesthetic. Behind the scenes, new technologies have discreetly appeared: new remotely-controlled cameras, state-of-the-art tools for the control room, etc. Furthermore, screens at the back of the studio are suspended in portrait rather than in landscape. This has been done to reflect the new ways of consuming news, such as on mobile phones. “This means we can create content that can be used both for smartphones and the TV,” says Yoann Saillon, the artistic director for TF1 group’s News division.

launch of LCI, the first French rolling news channel.
LCI asks the French broadcasting authority (CSA) to allow it to air as a freeview DTT channel.
the CSA approves the migration to freeview after several twists and turns.
LCI starts broadcasting on channel 26 of French DTT.

“We have to be present wherever the viewer watches content.” The words of LCI’s Chief Executive Officer outline the channel’s philosophy – i.e. what you see on the TV screen is only the tip of the “LCI iceberg”. This is because the whole organisation has been revamped. The Newsroom is now at the heart of LCI’s editorial team. The web and TV broadcasting teams have been brought together so that they can cooperate more closely. The aim is to find appropriate formats for each type of media and give particular importance to social networks, which are drivers of audience ratings and reputation.

This equates to a bi-media culture, content that is unique in terms of substance and style, and a new way of reporting news, etc. LCI may have only just celebrated its first birthday, but there’s no doubt it’s already one of the big hitters. 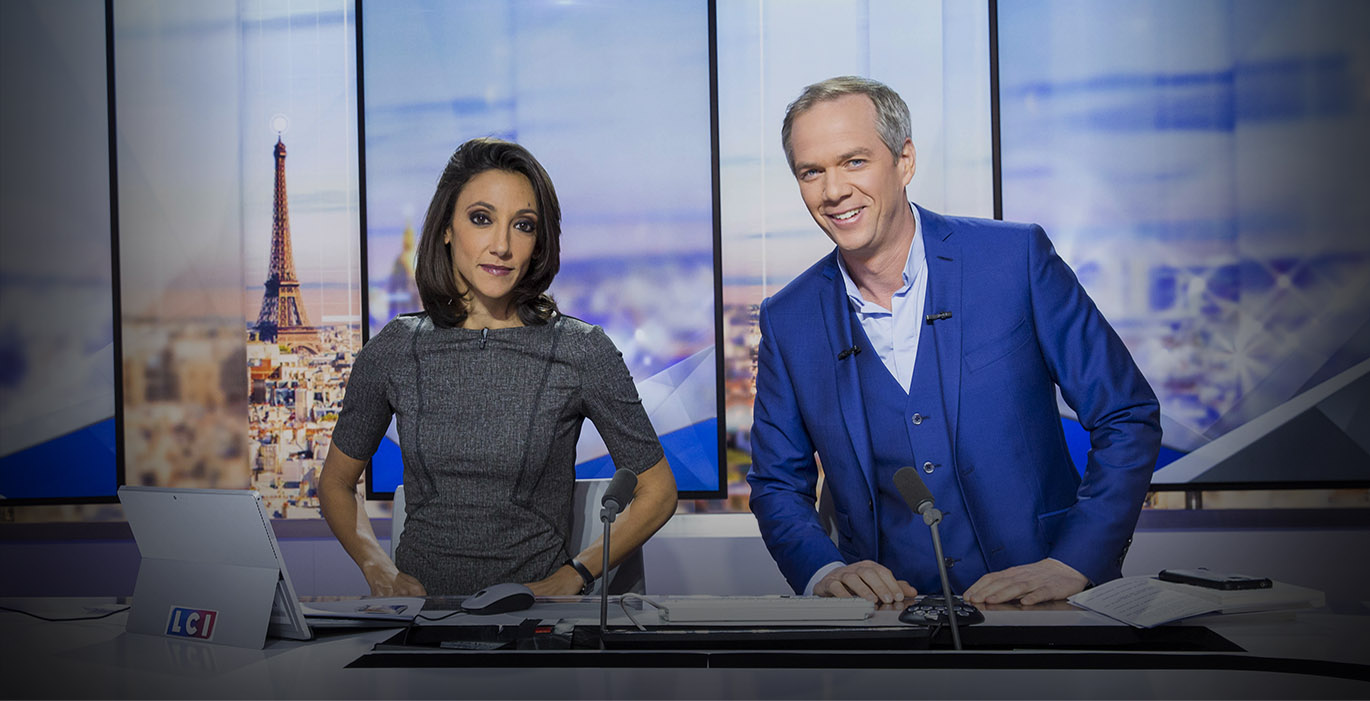 Rebecca Fitoussi and Julien Arnaud
in the Grand soir studio.
Between 8 pm and 10 pm,
the show discusses political and economic news. 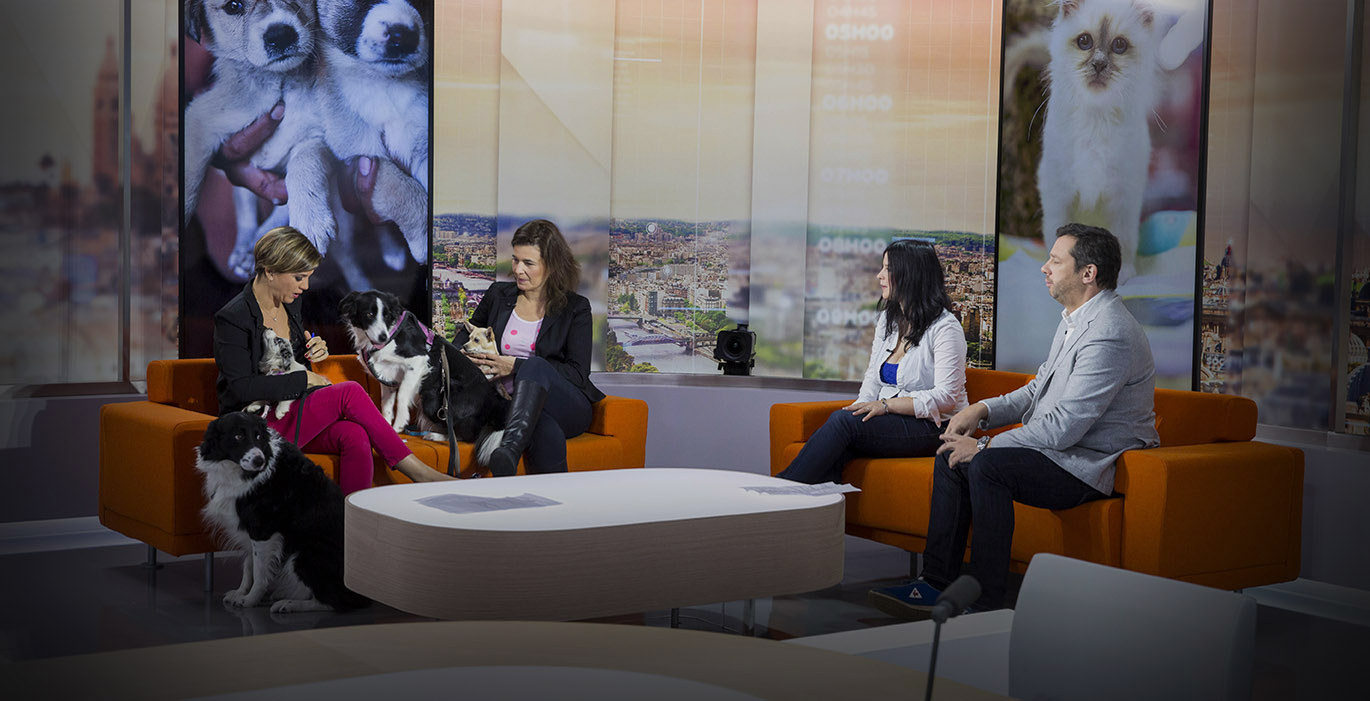 Bénédicte Le Chatelier on the set of LCI et vous
a show that focuses on the day-to-day concerns of French people:
health, well-being and consumer issues.