Report
10 min
18/04/2017
The Far North
Whatever the latitude, Colas knows how to get the job done, especially in harsh weather conditions. Here we see its crews at work in faraway Iceland and Greenland.
It is mid-August, but the chilly winds sweeping across the Reykjanes Peninsula at the southwestern tip of the “land of ice” are a sure sign summer is coming to an end. Lava fields carpeted with hardy moss stretch to the horizon, forming the dull landscape that greets passengers as they touch down at Keflavík International Airport on the outskirts of the capital, Reykjavik.

On the airport grounds, more black, but rather than lava, it is the asphalt of the long runways for the Boeings of Icelandair and the Airbuses of Wow. The ballet of airliners taking off and landing every two minutes at this peak of the tourist season does not seem to faze the Colas workers who are renovating the two main runways and two taxiways 90 meters away. About forty employees from Colas and its subcontractors will be working on this project until 2018. The €22-million contract is the largest awarded to Hlaðbær-Colas, Colas’ Icelandic subsidiary, since its creation. 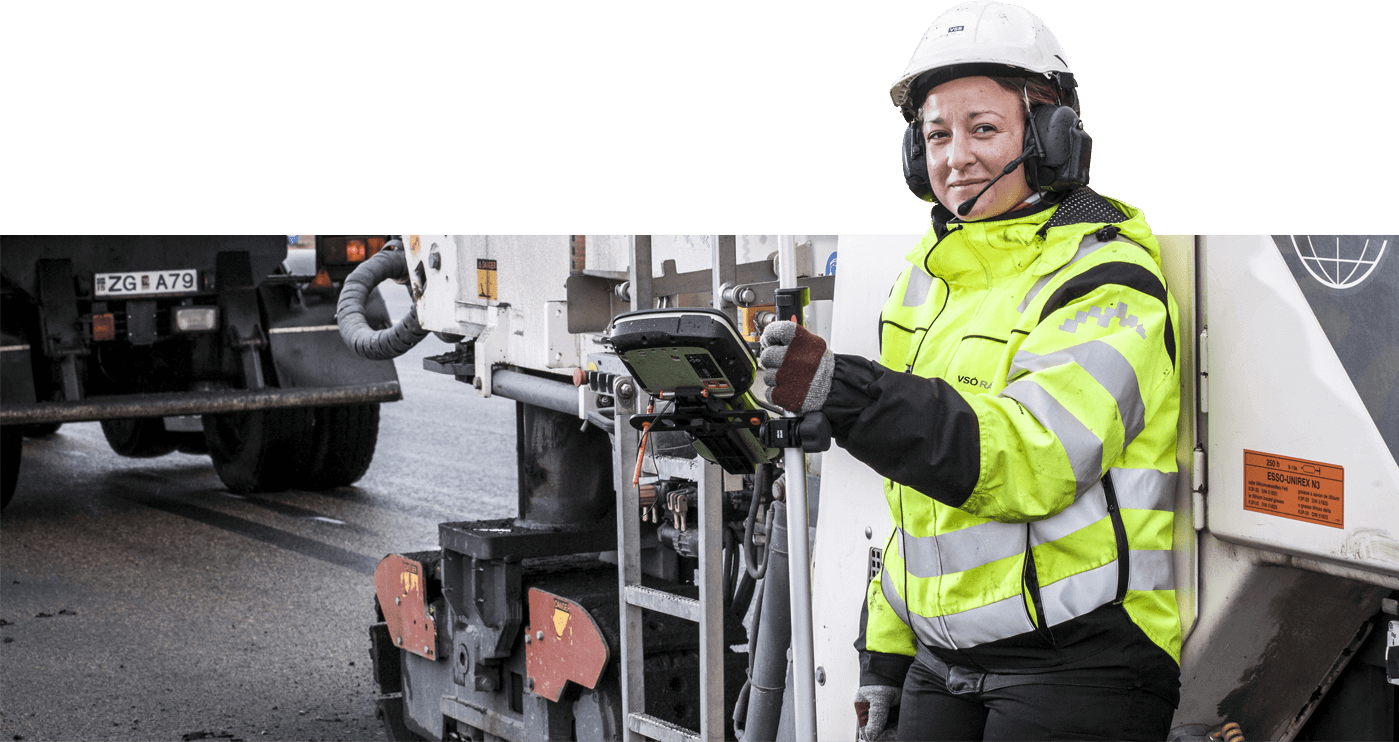 Beating the freeze
The crews are taking advantage of the summer weather to get as much done as possible before November, when rains and freezing temperatures make producing and applying good-quality asphalt impossible. Their hours are geared to the sun, and since it barely dips below the horizon for three months, they sometimes work until nearly midnight 1 . When the temperature is below 5°C, the asphalt cools too quickly and does not compact properly. Water that seeps into the asphalt can cause the pavement to break. Along with the freezing cold, snow complicates roadwork in Iceland because of the serious damage done to pavement by studded snow tires. When the snow melts, it is not uncommon to see deep ruts resembling the tracks left by cross-country skis in the center of roads. Sigthór Sigurdsson, general manager of Hlaðbær-Colas, points out that “in Iceland, the main roads require maintenance every five to seven years,” twice as often as in France. Iceland is a volcanic island, as the entire world discovered when Eyjafjallajökull erupted in 2010. But much of the basaltic rock is too young and thus too soft and porous for use in road construction.

As a result, aggregates must be imported from Norway by boat in shipments of 10,000 or 25,000 tons, four to six times a year (and twice as often with the big Keflavík project). It can take up to twelve hours to unload the rock. The bitumen also comes from Scandinavia or occasionally the United Kingdom with the same frequency in 3,000-ton shipments.
1. Within a regulated period of 13 consecutive hours. 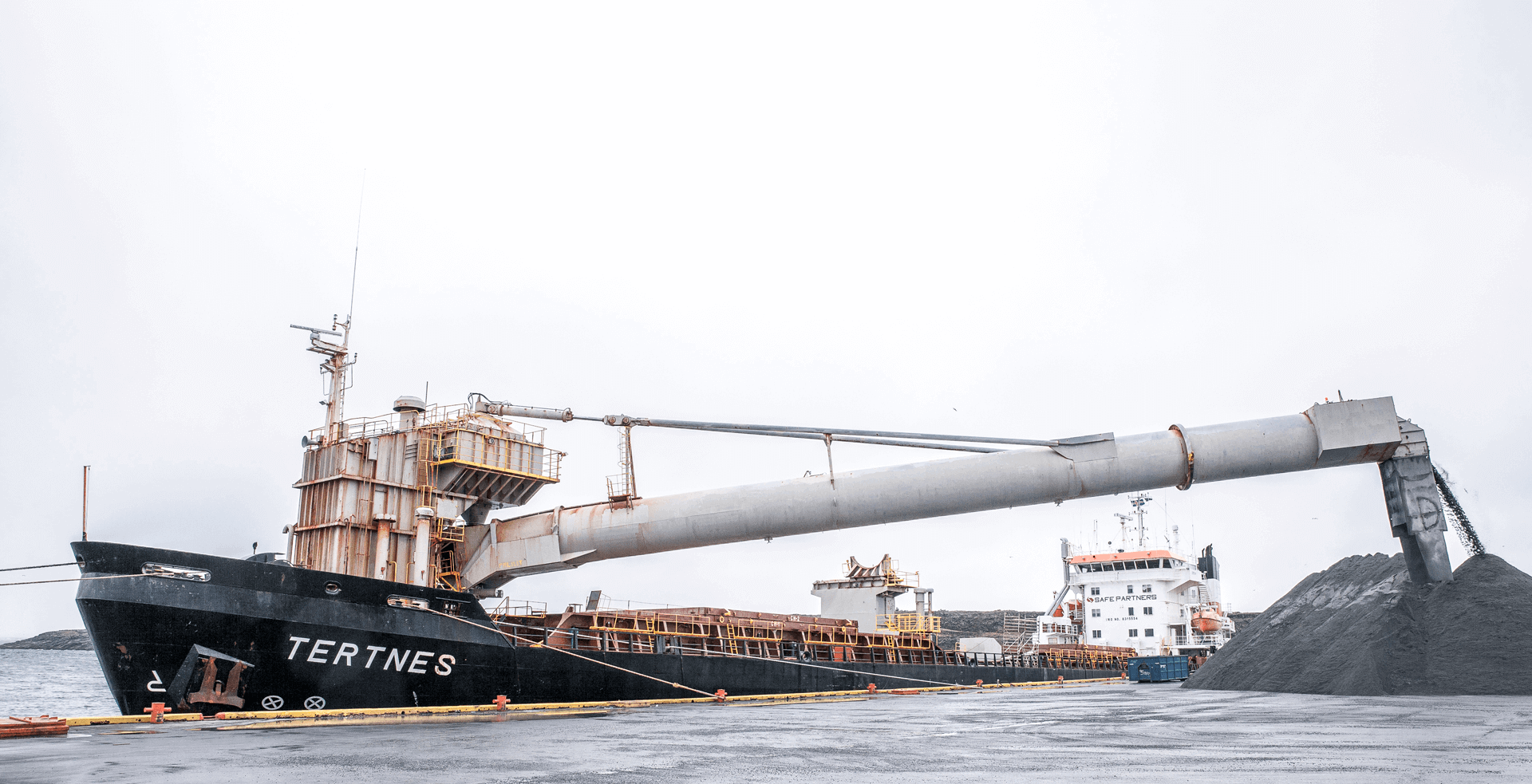 64°08′07″ N · 21°53′43″ W
13,000 km of roads, the largest road network in Europe in relation to the population (330,000)
Drumming up recruits
Since 1995, Hlaðbær-Colas has been the largest company on the island producing asphalt mixes, which it sells to a dozen or so small, local operators. Since projects are done in the summer, its crews and subcontractors sometimes work up to eleven days in a row and then take three days off. The company’s workforce doubles in summer from about forty to eighty people. It is not easy to find new recruits at this time of year because everyone in the country is looking for people to cope with the annual influx of 1.7 million tourists.

Hlaðbær-Colas thus hires many students, like Erlingur, a future computer specialist with blue eyes and a blond ponytail, who is working on the Reykjavik highway repair project. The regulars teach the job to these young people, some of whom come back each summer. In winter, however, days are short, and the work is totally different. Four teams crisscross the country round the clock, seven days a week, checking road conditions and plowing snow. Versatility is essential here.

Did you know ?
The last time a volcano erupted in Iceland was in 2014. Enough lava flowed to supply road-building materials for 33,000 years (!), though it will be thousands of years before it can be used for this purpose.

Volcanologists now expect Katla, which lies beneath the Mýrdalsjökull Glacier, in southern Iceland, to erupt at any time. This once-in-a-century event could spew a cloud of ash into the sky that would be much larger than the one produced by Eyjafjallajökull.
“HOMEMADE” INNOVATIONS
Ingenuity is also essential. Hlaðbær-Colas has developed two emulsions: one a higher-resistance surfacing product well adapted to the Icelandic cold, and the other a cold mix for secondary roads made totally from recycled asphalt. At the moment, it is also investigating how recycled bottle glass could be incorporated in its asphalt mixes. In the Keflavík airport project, it is even employing 3D technology to ensure that the surfacing is perfectly smooth. Sensors mounted on tripods along the runways and on the paver that spreads strips of asphalt 7.5 to 9 meters wide check the regulation of the machine (angle, height, etc.) to see that the 5-millimeter tolerance is respected. 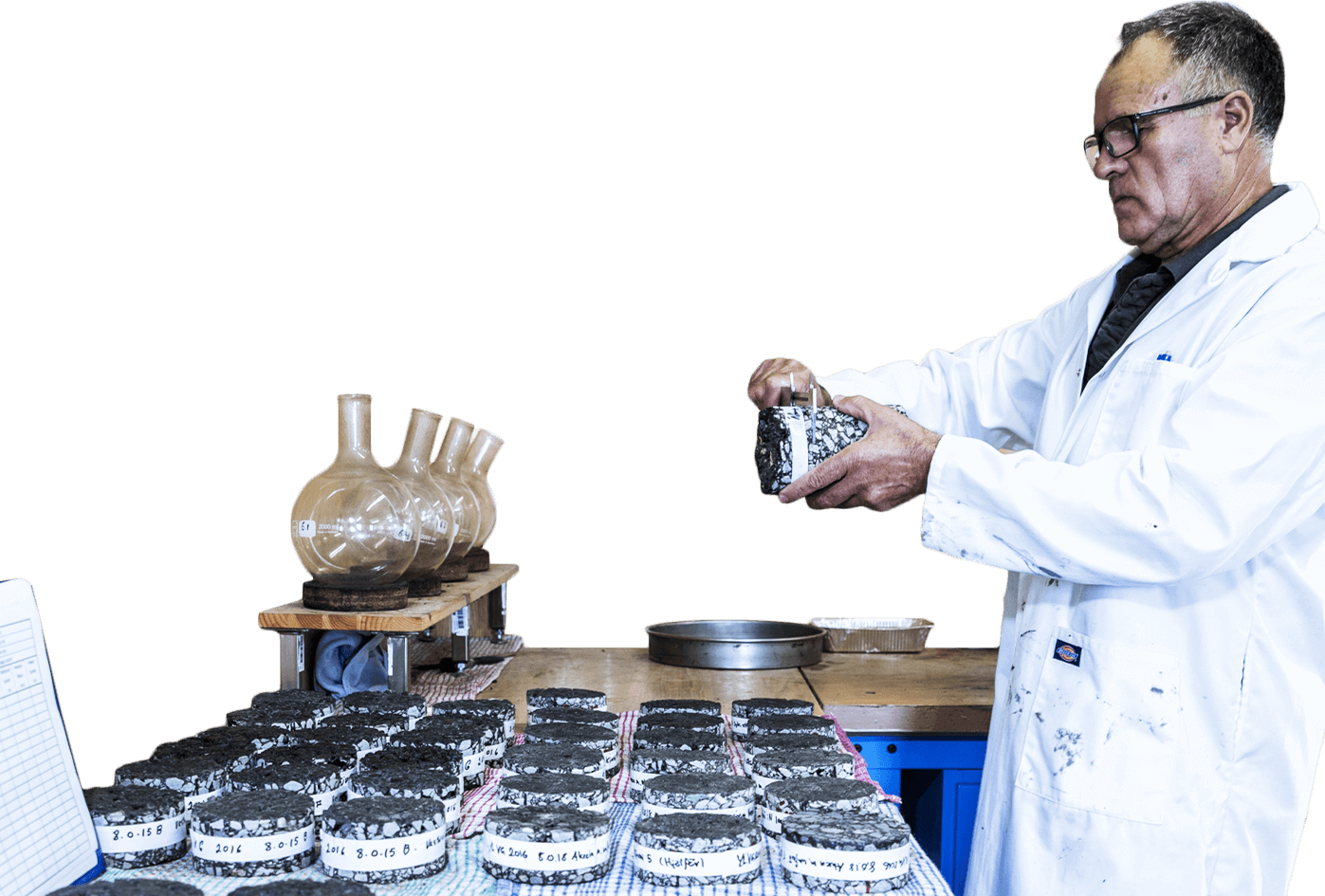 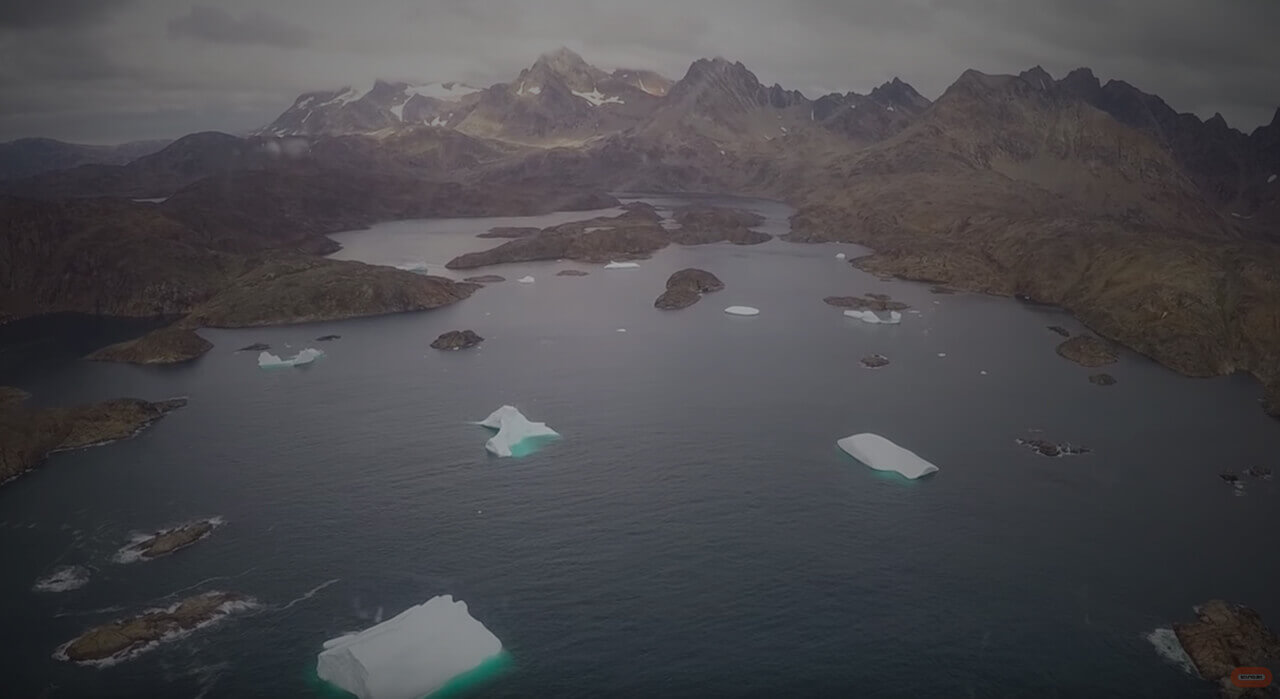 #BOUYGUESINSIDE
No comment: roadworks in the Great North – Iceland – Greenland
“
You have to learn
how to get along by your own devices here.
Gunnar Erlingsson project manager
ABOVE THE ARCTIC CIRCLE
Being resourceful is every bit as important above the Arctic Circle, in Greenland, where Hlaðbær-Colas also works. This summer, thirteen of its employees spent fifteen days on the world’s second-largest island, 80 percent of which is covered by an ice sheet, to renovate some of the roads at Tasiilaq, the largest town on the east coast, with 2,000 inhabitants. The trip there takes an hour and a half by plane and another ten minutes by helicopter, or one hour by boat in summer, when the bay is not frozen over.

Everything comes from Europe. “One day we had to replace a part on a machine that broke down. Having it shipped by sea would have taken too long, so we stripped the part off another machine we happened to have here”, recalls Gunnar Erlingsson, the project manager and Erlingur’s father. He has become so attached to this land that he now dreams of moving here permanently.

“You have to learn how to get along by your own devices here.” A few Inuit, like Ulrik, have been trained by the team and are working in the project. The entire town is fascinated by the show put on by the machines – especially the children, who are thrilled to ride their bikes on a brand new esplanade so smooth that hockey pucks slide almost by themselves. Behind houses built of wood or colored sheet metal, icebergs drift so slowly their movement is imperceptible. It could not be more peaceful.

Did you know?
Hlaðbær-Colas mixes fish oil (an abundant resource) with the bitumen in a proportion of 6% to improve the spreading properties of its surfacings. Owing to the climate, the bitumen must be fairly malleable so that it does not harden too quickly. 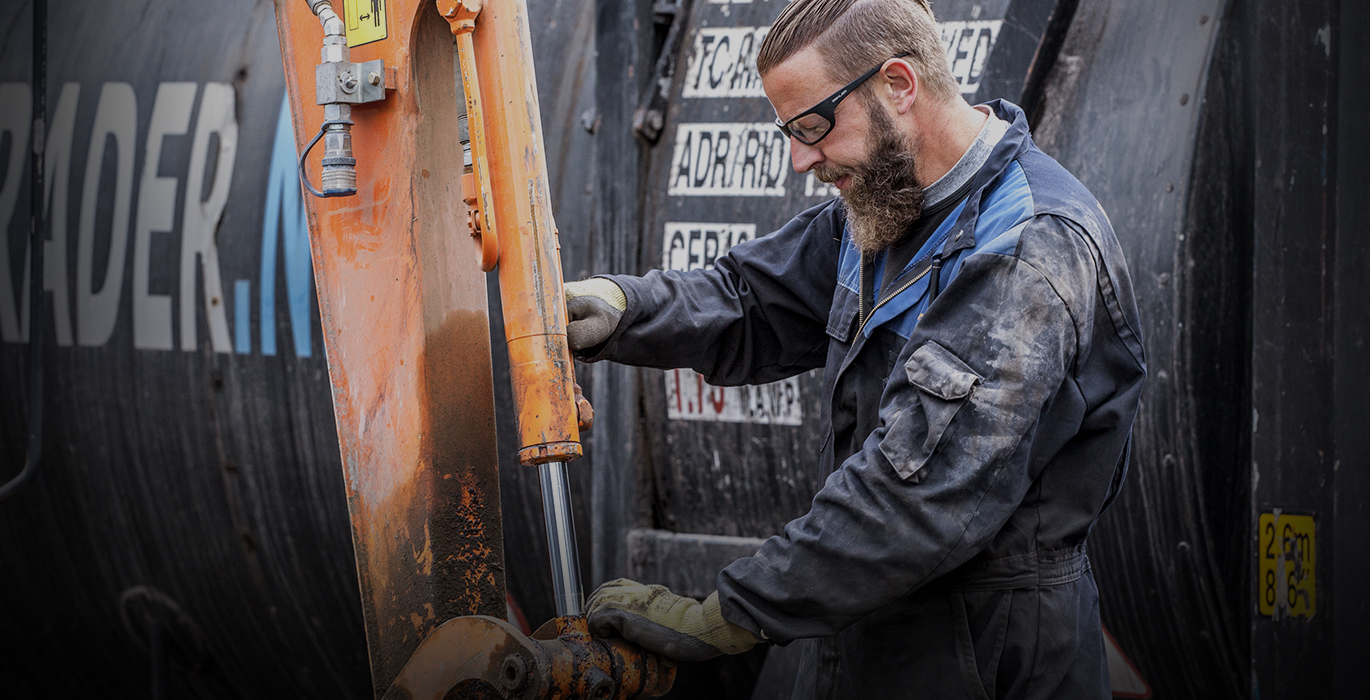 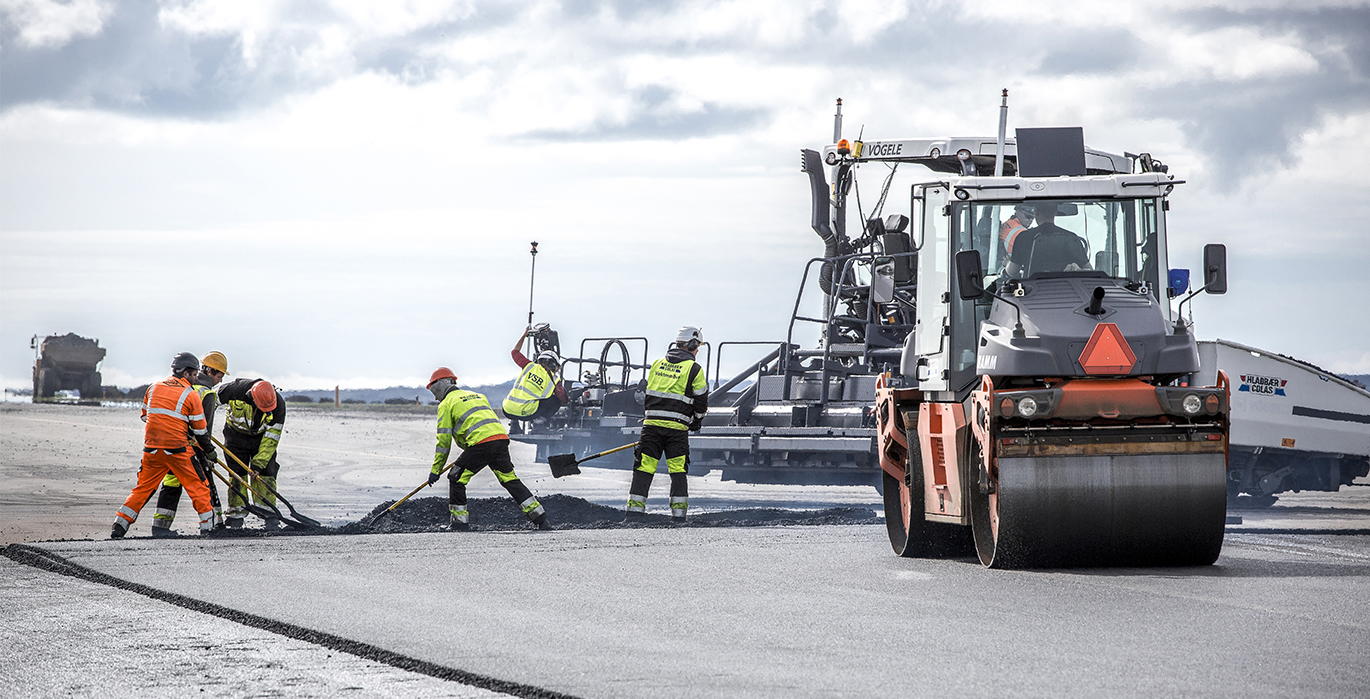 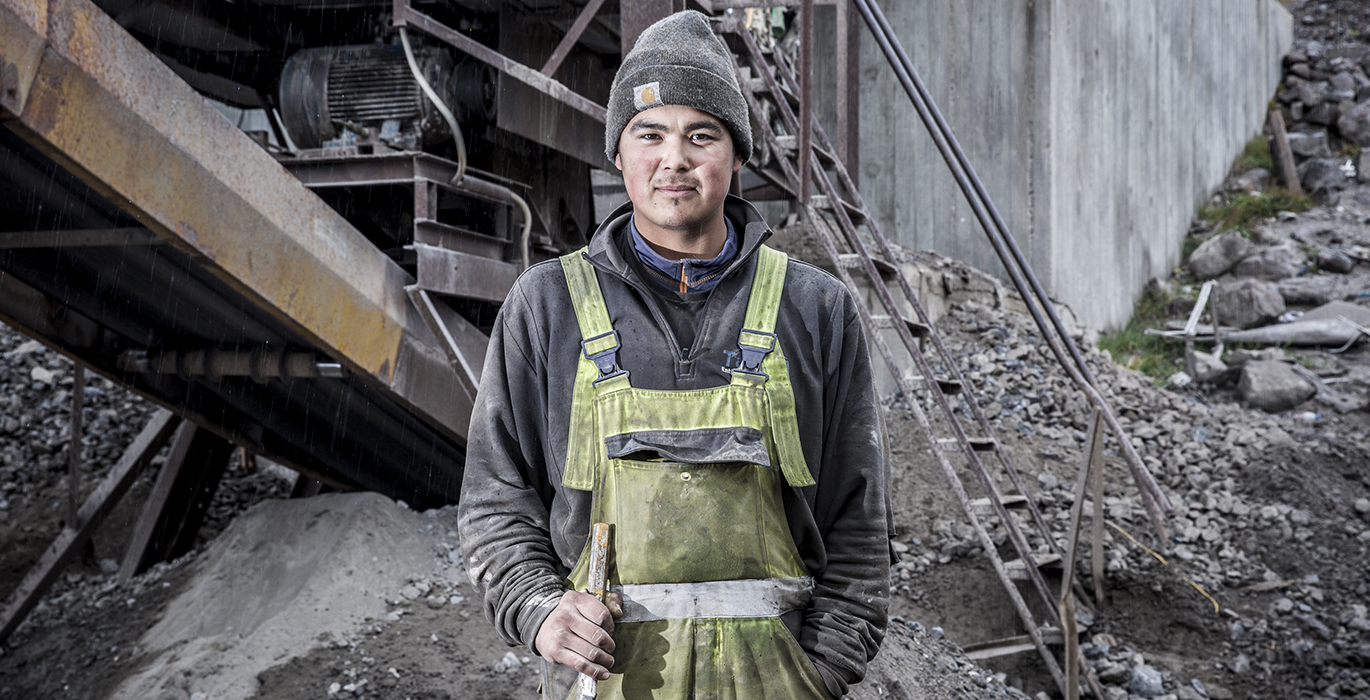 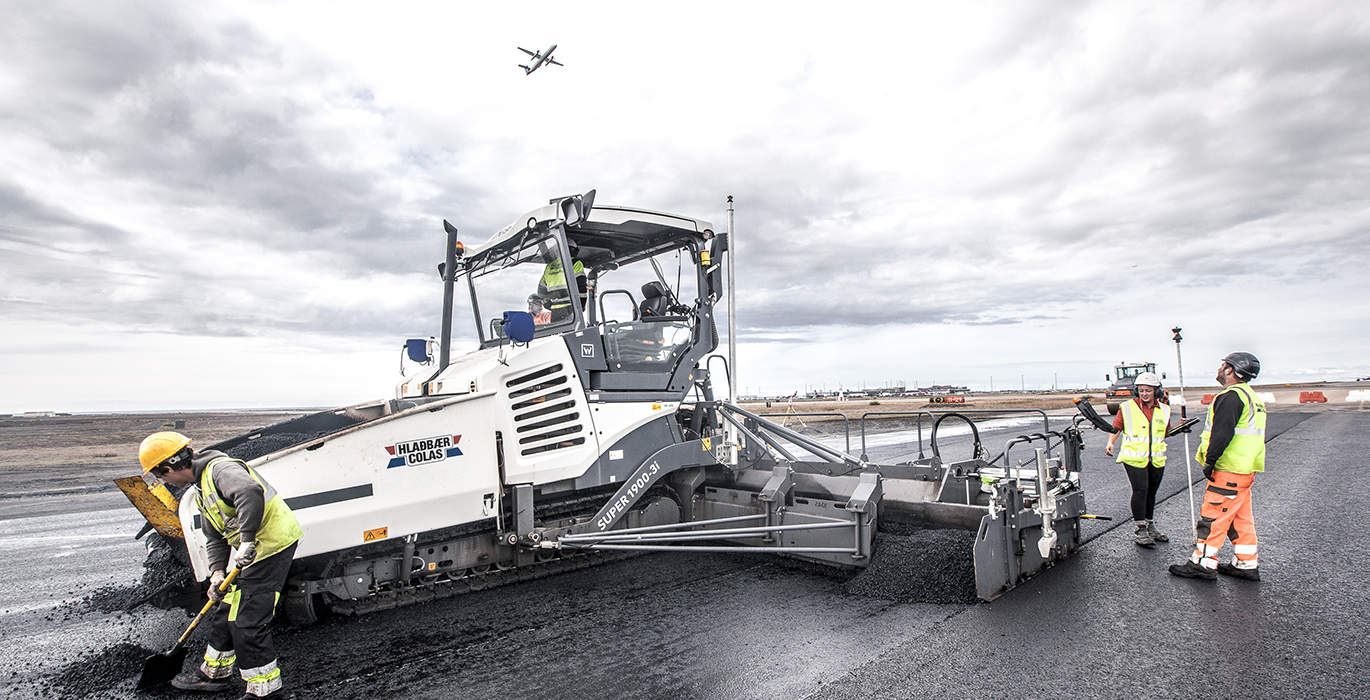 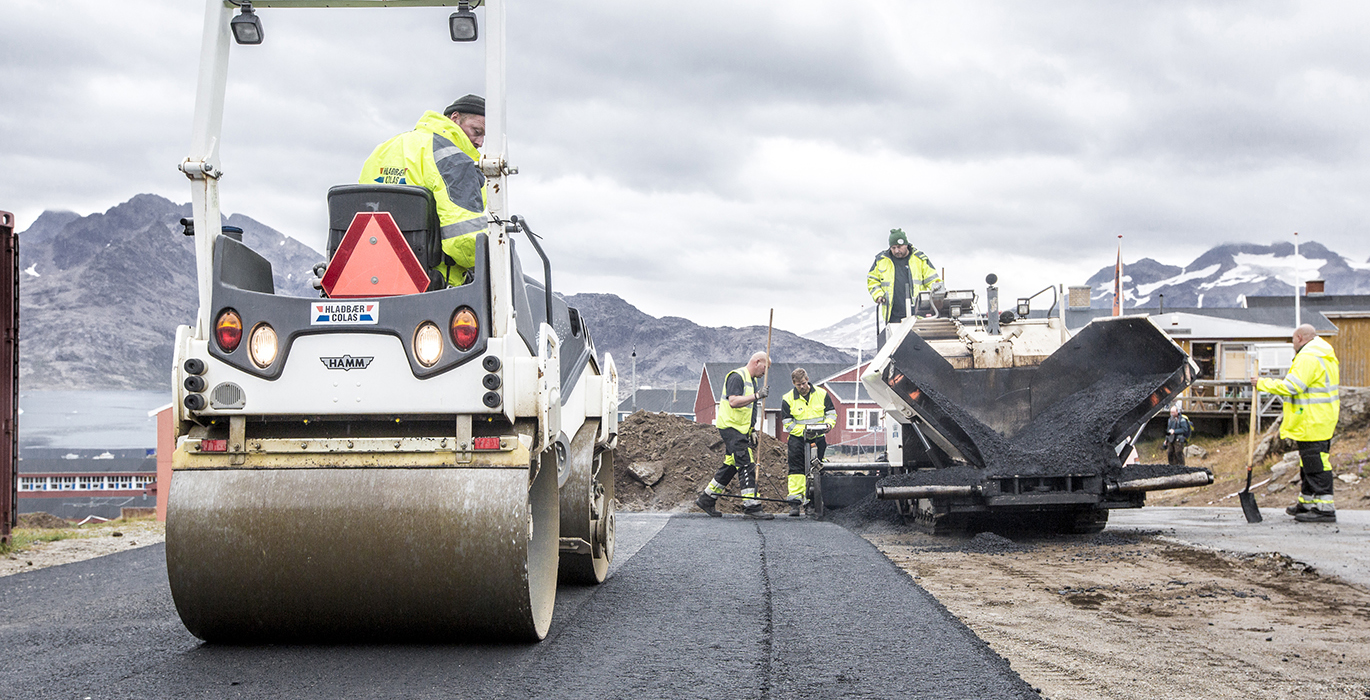