The opening of Bordeaux Métropole Arena, built by Bouygues Bâtiment Centre Sud-Ouest, is a major event for the entire region.The entertainment venue in white concrete represented a major challenge for local teams and is generating a lot of excitement.
By François Menia

Sitting like a huge white stone on the banks of the Garonne, Bordeaux Métropole Arena dominates Floirac, a fast-growing community in the Bordeaux urban area, as well as the many buildings – gymnasiums, clinics, and housing – that are springing up one after the other around it.

The building with curved architecture that Bouygues Bâtiment Centre Sud-Ouest (a subsidiary of Bouygues Construction) built for Lagardère Live Entertainment will soon provide something the region is lacking: a venue for entertainment and sporting events worthy of France’s seventh-largest city. Until today, many concerts are still held at the municipal skating rink, where the acoustics are far from ideal. Starting in early 2018, up to 11,300 people will be able to enjoy concerts, shows, and even tennis matches and basketball games at the Arena.

Teams from Bouygues Bâtiment Centre Sud-Ouest worked for twenty-two months to construct this new temple of entertainment, with as many as 200 workers on the job at peak times. The main difficulty was producing the smooth curves in the plans of architect Rudy Ricciotti.

In fact, most stadiums and entertainment venues are clad in metal or glass. “We could have done the whole thing with precast concrete elements assembled on site, but we wouldn’t have obtained the desired effect. That’s why we relied on the more complex technique of poured concrete.”

At Bordeaux, the architect wanted “craftsmanship” to be visible in the building. And the craftsman in question was Hernane de Vieira Matos.
A finishing mason with the Group since 2007, he was one of eleven workers who had the task of giving the concrete its final texture. “Poured concrete means a lot of work,” says the mason, who nevertheless found it “a pleasure” to work on this building. And he adds: “You must want to do good work, because if you slip up, everyone will still see it ten years from now, and it will be a stain on the company’s image.”

Rudy Ricciotti is really drawn to the use of concrete for façades. It was very daring to design a hall with rounded forms and finished with raw concrete.”

Some 14,500 cubic metres of white concrete were poured in ten months into large wooden formworks designed specifically for this project. By using 3D modelling, it was possible to complete the structural studies correctly and come up with a synthesis rapidly, efficiently, and reliably.

The stands in the Arena are also made of poured concrete. The roof is supported by a framework having two main beams, one 55 metres and the other 82 metres long. The latter has three sections, which were lifted with a 700-tonne crane. It took the teams of Thibaut Davy, who was responsible for this framework, one month to assemble it inside the Arena.

At the same time, cranes set the last formworks in place, and workers installed the acoustic pyramid panels that will keep the sound from bouncing around. The acoustics in the covered logistics courtyard outside received the same attention. Cédric Lamothe, an engineer, says all this was a “unique challenge”, as were “the stands poured inside, which will also function as acoustic insulation”.

The terms of reference are clear when it comes to noise levels: not one single decibel must escape to the Arena’s urban surroundings. Everything seems to be perfectly calculated, like, for example, the “Equalizer,” the large windows on the façade displaying LED lamps that resemble those of a digital equalizer. The building will thus be as easy to spot at night as during the day.

A bond with the city

The Arena is designed to add to the social fabric of the community, with its restaurant on the ground floor, for example. The obvious aim is for the people of Bordeaux to make Floirac part of their city. It has long been isolated, but that situation is about to change. When Jean-Jacques Bosc bridge, located just 200 metres from the entrance, is finished, it will take only a few minutes to get to the Arena from the city centre, a fairly rare convenience for a large venue in a major city. An important feature of this project is its strong ties to the region. More than 80 percent of the companies involved in the construction were local.

“Taking part in a project like this made us very proud, and it was very motivating for our employees,” says Thierry Bruneteau, the manager of a company that worked on the ceilings and acoustics. A circular economy approach with an emphasis on local sourcing was applied, so a portion of the building materials was recycled or fully reconditioned. Later on, some of the wooden formworks will be used at a nearby skateboard park. The Arena is already reverberating in harmony with the community. 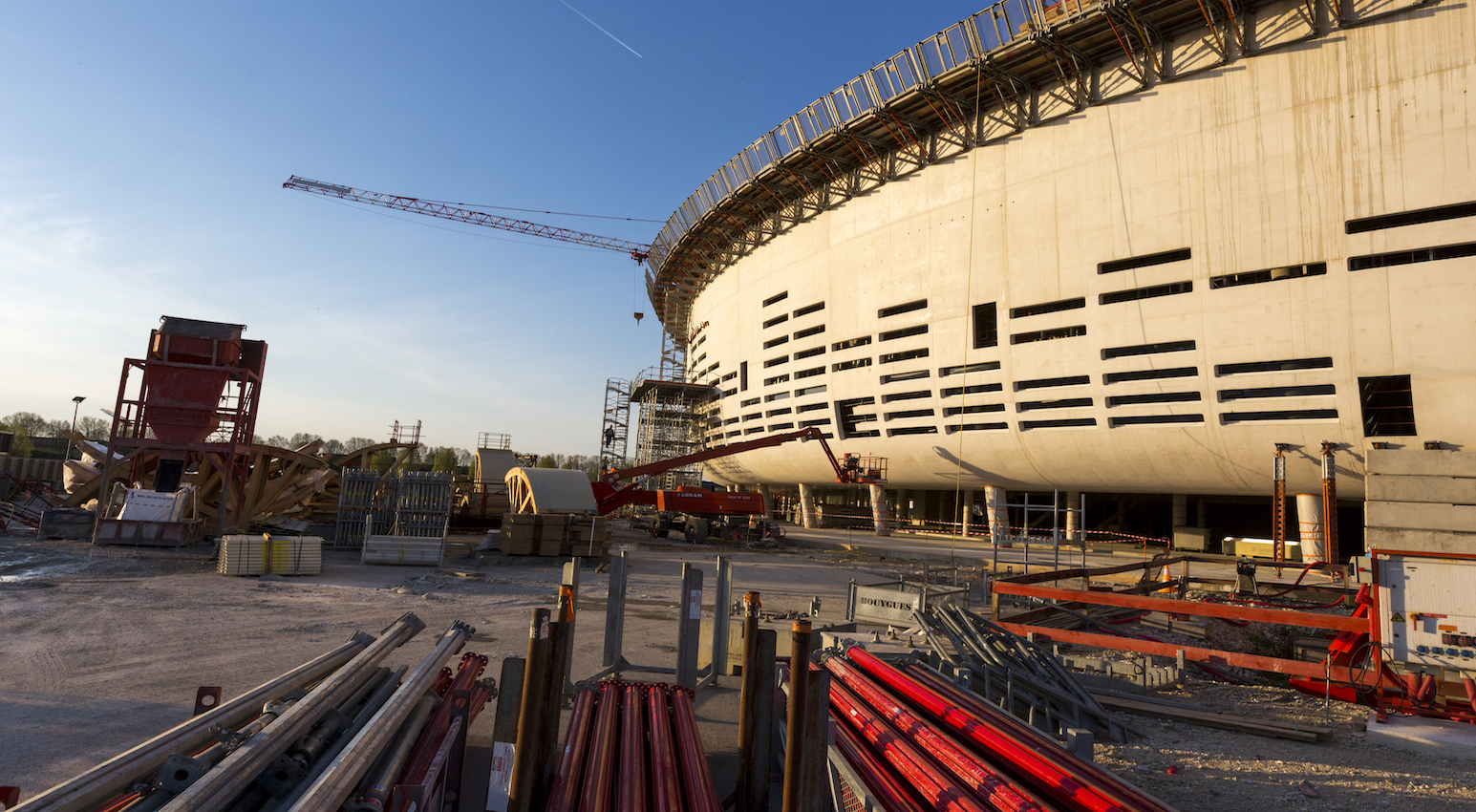 The roof rests on a framework
supported by two main beams,
82m and 55m long. 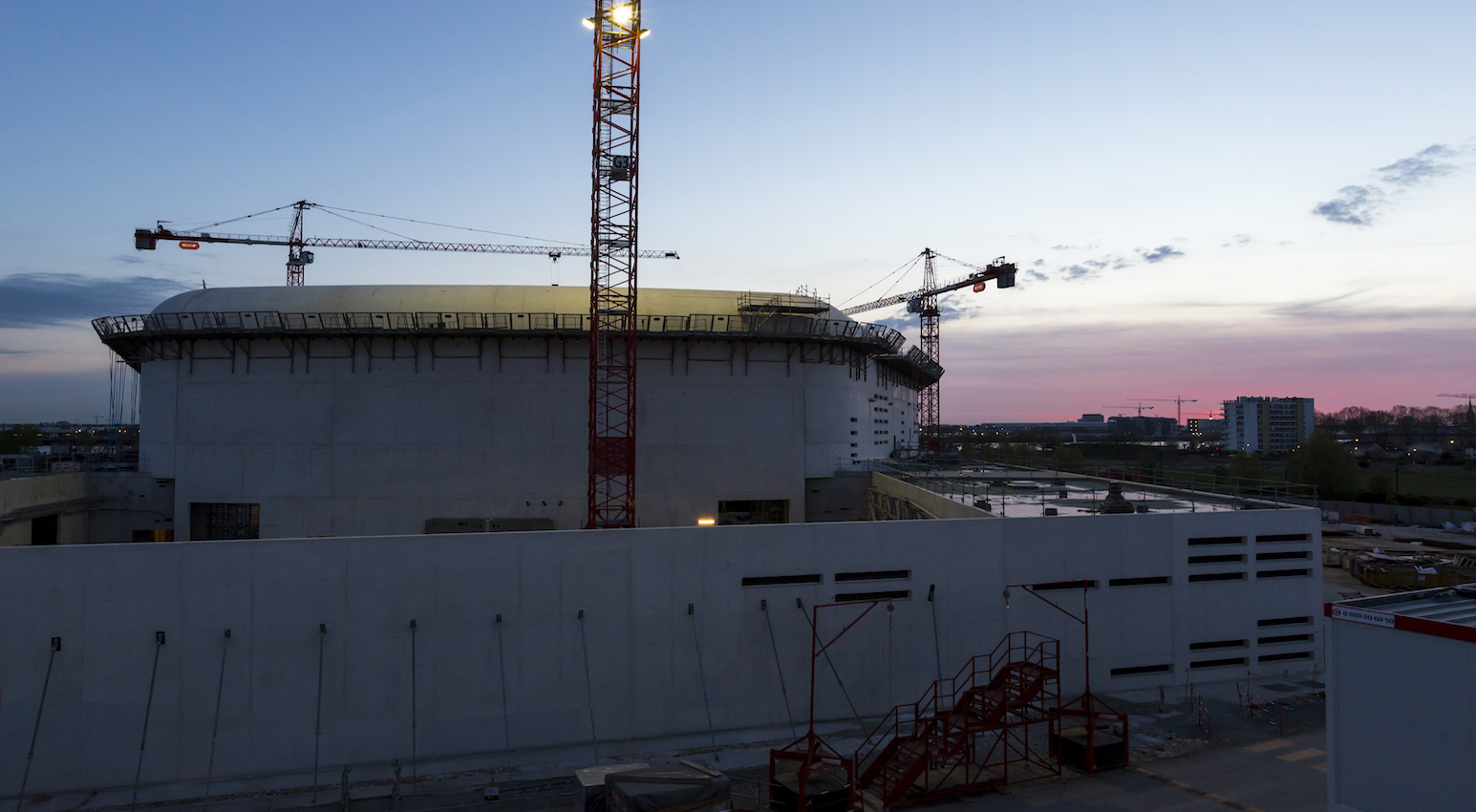 With a capacity of 11,300 spectators,
Bordeaux Métropole Arena will be a venue for
entertainment and sporting events. 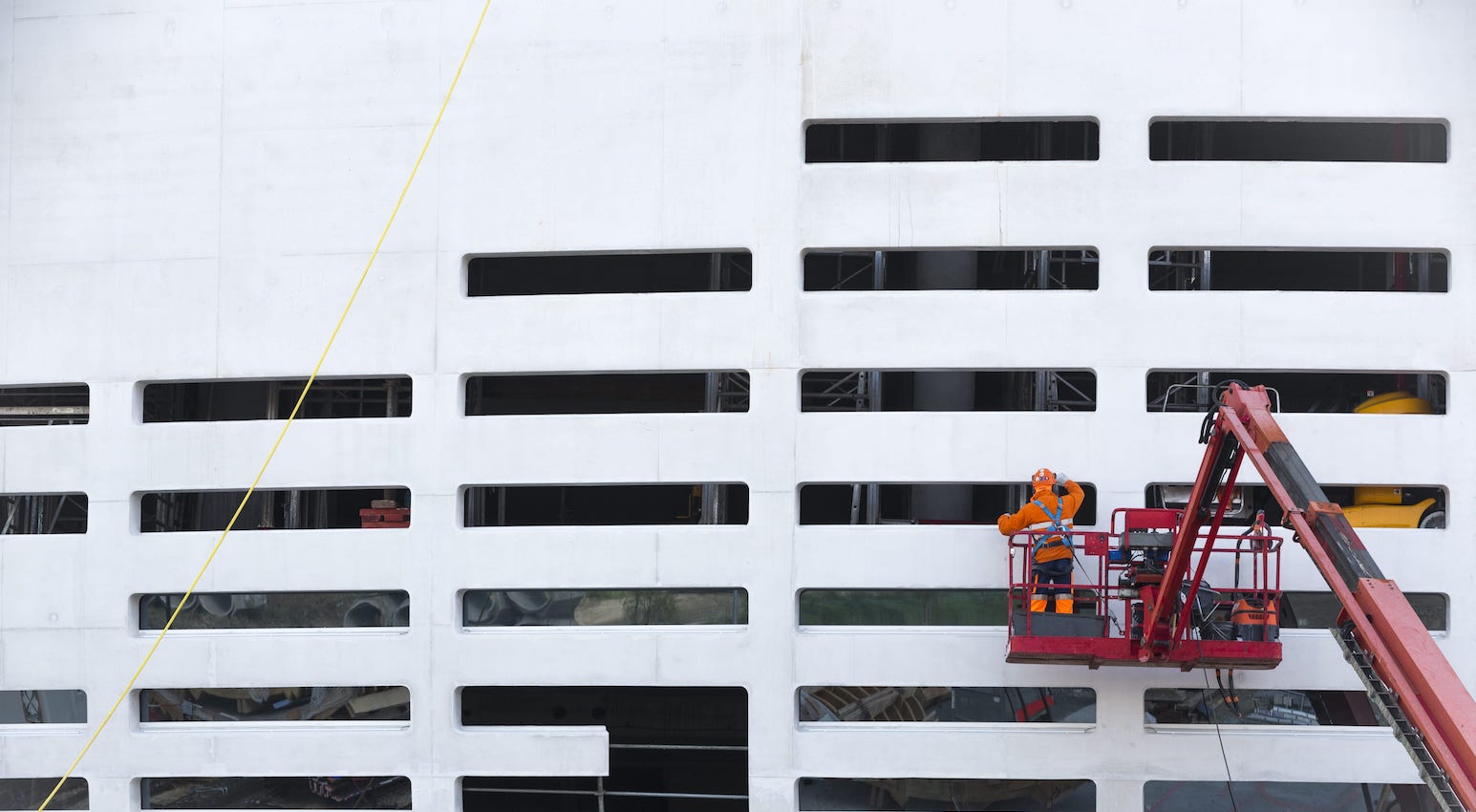 Special attention was paid
to the finishing work. 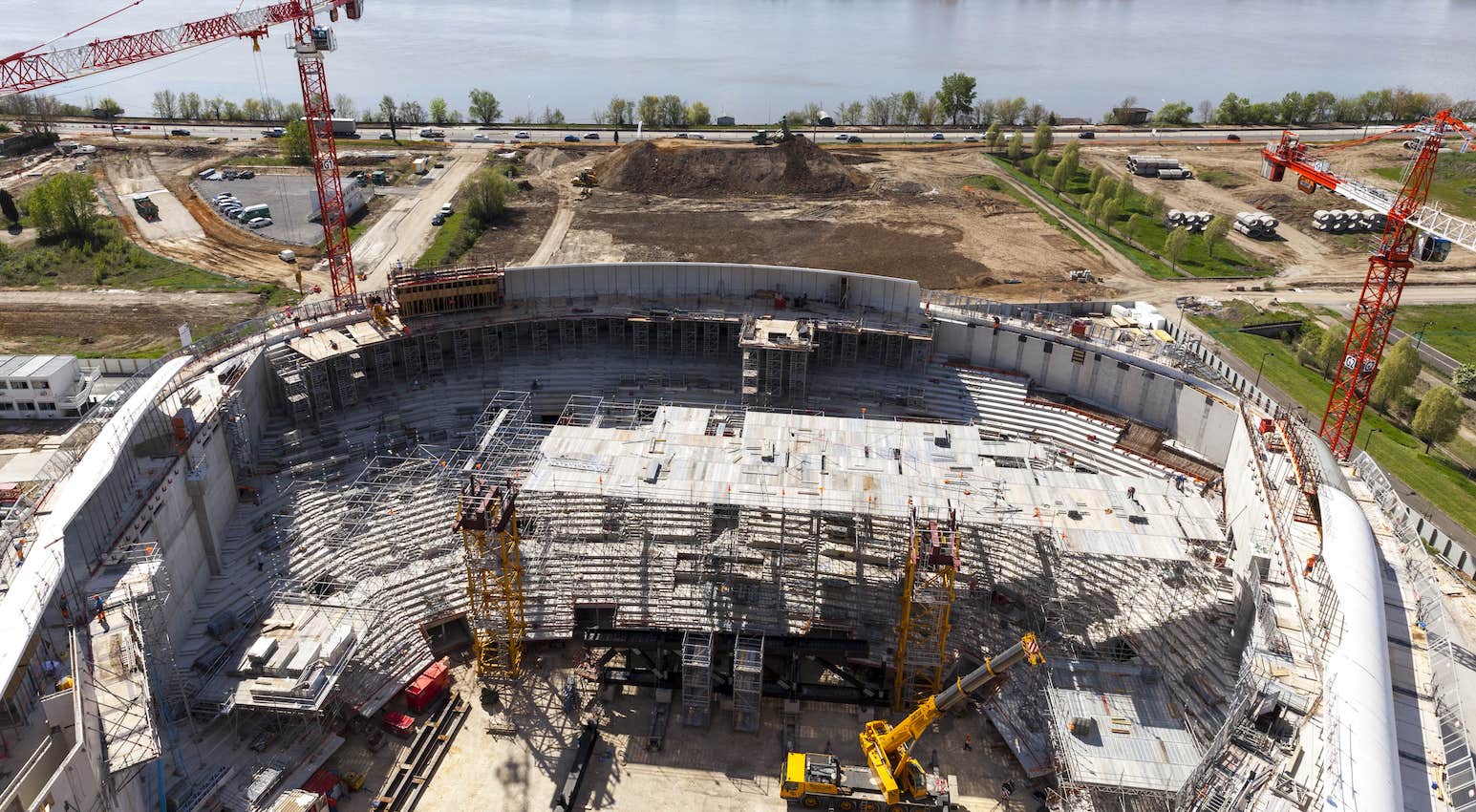 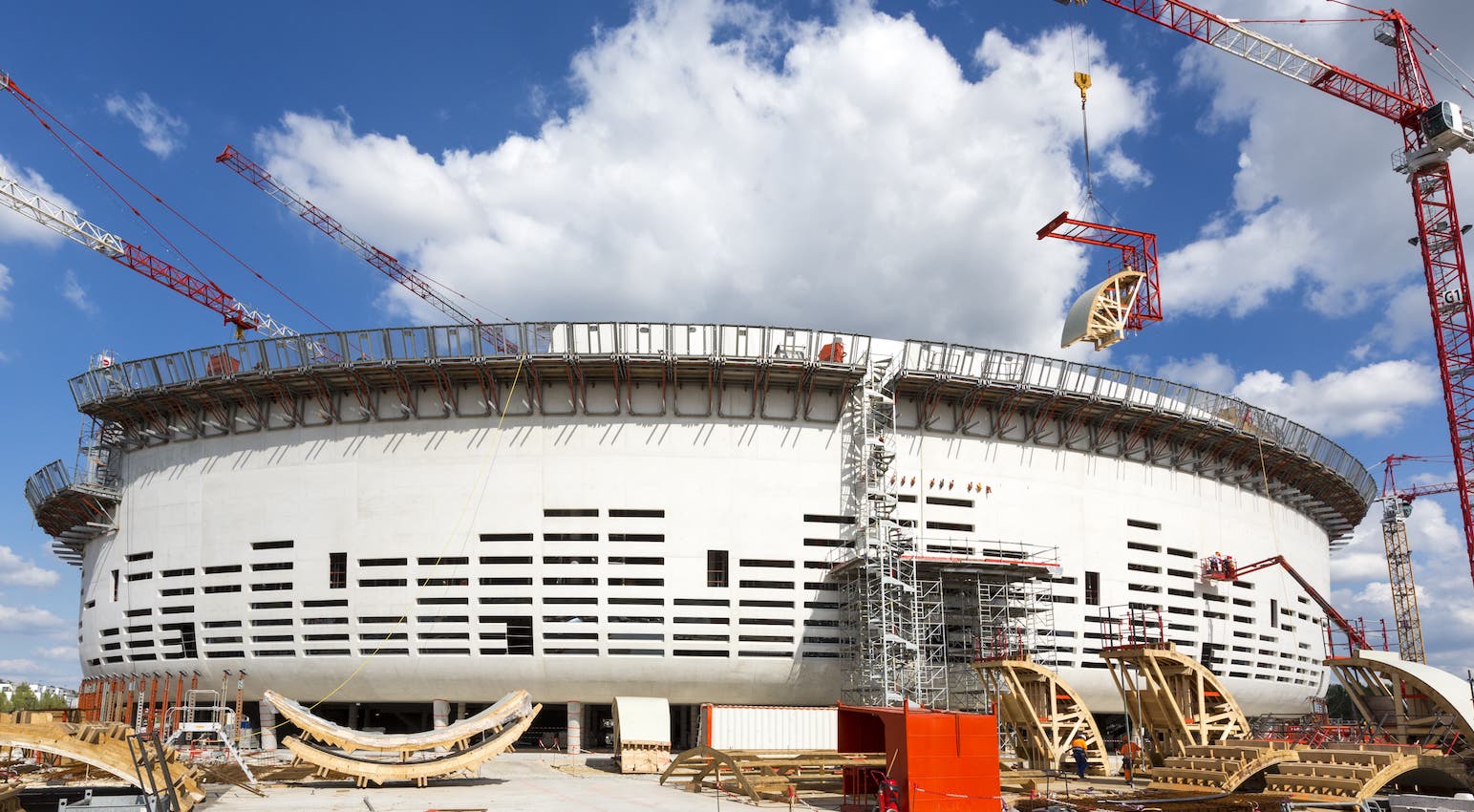